The Rizal Memorial Track and Football Stadium, simply known as the Rizal Memorial Stadium since it is the main stadium within the Rizal Memorial Sports Complex, is the national stadium of the Philippines. It served as the main stadium of the 1954 Asian Games and the Southeast Asian Games on three occasions. Prior to its renovation in 2011, the stadium was badly deteriorated and was unfit for international matches. The stadium is also officially the home of the Philippines national football team.

Since the 1930s, it has hosted all major local football tournaments and some international matches.[note 1] When a new tartan track was laid out at the oval for the country's initial hosting of the 1981 Southeast Asian Games, the venue became a hub for athletics and the football field's condition slowly deteriorated.[3] It eventually became unsuitable for international matches which meant the Philippine national team would have to play their home games at an alternate venue.

In early 2009, as the Philippine Sports Commission (PSC) announced plans to renovate the Rizal Memorial Sports Complex, restoration of the football field and stadium was also planned.[note 2] The restoration would include removing the track oval and transforming it to a modern football stadium.[4] The PSC has vowed to raise money from the private sector and the government, totaling at least ₱50 million for the renovation, which they plan on doing sometime in the last quarter of 2009.[3] In February 2010, it was announced that the PSC was still waiting for a private partner to co-finance the project, therefore the original schedule for the renovation was delayed.[5]

The renovation of the stadium is one of many projects of the PSC to help struggling associations to be more competitive.[6] Although the transformation of the Rizal Stadium into a football-specific stadium has drawn skeptics as there is a belief that it should lead to a movement to revive football in general, but won't and it doesn't do anything for the sport at grassroots level.[5]

Despite the doubts, it was announced in February 2010 that the plans for renovation are set to start sometime in March 2010 with the participation of De La Salle University. The project is expected to finish in six months.[7] National athletes presently training at the track and field oval will be relocated at the PhilSports Complex or at the PSC training center in Baguio.[3]

After renovations in 2011 in preparation for a FIFA World Cup Qualifying match, the stadium was found to be able to seat 12,873 in accordance with FIFA's seating specifications.[8] The stadium has since become the primary venue of the United Football League.

The stadium will host its first international rugby test when the Philippines hosts the 2012 Asian Five Nations Division I tournaments, which doubles as a qualifying tournament for the 2015 Rugby World Cup; the goal posts were erected just days prior to the tournament.[9] 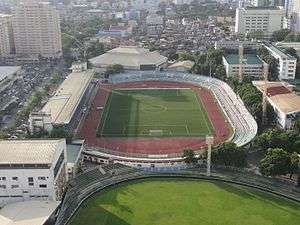 Rizal Memorial Stadium from the air

On 4 July 1966, the Rizal Memorial Stadium hosted two soldout concerts of the Beatles held in Manila and was one of only two cities in Asia they have ever played in. The combined attendance was 80,000 with the evening concert registering 50,000 paying audience and became the Beatles' second biggest concert ever.[10]