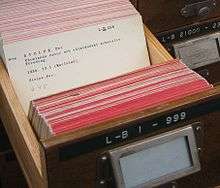 An index card in a library card catalog. Type of cataloging has mostly been supplanted by computerization.

An index card (or system card in Australian English) consists of card stock (heavy paper) cut to a standard size, used for recording and storing small amounts of discrete data. A collection of such cards either serves as, or aids the creation of, an index for expedited lookup of information (such as a library catalog or a back-of-the-book index). This system was invented by Carl Linnaeus,[1] around 1760.[2]

Index cards are used for a wide range of applications and environments: in the home to record and store recipes, shopping lists, contact information and other organizational data; in business to record presentation notes, project research and notes, and contact information; in schools as flash cards or other visual aids; and in academic research to hold data such as bibliographical citations or notes. Professional book indexers used index cards in the creation of book indexes until they were replaced by indexing software in the 1980s and 1990s. An often suggested organization method for bibliographical use is to use the smaller 3-inch-by-5-inch cards to record the title and citation information of works cited, while using larger cards for recording quotes or other data. Index cards are used for many events and are helpful for planning.

Until the digitization of library catalogs, which began in the 1980s, the primary tool used to locate books was the card catalog, in which every book was described on three cards, filed alphabetically under its title, author, and subject (if non-fiction). Similar catalogs were used by law firms and other entities to organize large quantities of stored documents. However, the adoption of standard cataloging protocols throughout nations with international agreements, along with the rise of the Internet and the conversion of cataloging systems to digital storage and retrieval, has made obsolescent the widespread use of index cards for cataloging.

Using cards to create an index was the brainchild of 18th-century naturalist Carl Linnaeus, who is known as "the father of modern taxonomy" for his work on categorizing species. He needed a system for organizing data that was expandable and able to be rearranged easily, so he kept each datum on individual sheets and could add new sheets and reorganize simply.

Card catalogs as currently known arose in the 19th century, and Melvil Dewey standardized the index cards used in library card catalogs in the 1870s.

James Rand, Sr.'s Rand Ledger Company (founded 1898) with its Visible Ledger system, and his son James Rand, Jr.'s American Kardex dominated sales of index card filing systems worldwide through much of the 20th century. "Kardex" became a common noun, especially in the medical records field where "filing a kardex" came to mean filling out a patient record on an index card.[3]

Vladimir Nabokov wrote his works on index cards, a practice mentioned in his work Pale Fire.[4]