This article is about the paper-based material used to make boxes. For the product made of wood fibers, see fiberboard. 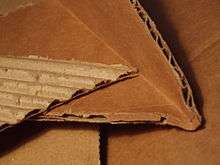 Corrugated fiberboard is a material consisting of a fluted corrugated sheet and one or two flat linerboards. It is made on "flute lamination machines" or "corrugators" and is used in the manufacture of shipping containers and corrugated boxes.

The corrugated medium and linerboard board both are made of kraft containerboard, a paperboard material usually over 0.01 inches (0.25 mm) thick. Corrugated fiberboard and paperboard are sometimes called corrugated cardboard, although cardboard might be any heavy paper-pulp based board.

The Scottish-born Robert Gair invented the pre-cut paperboard box in 1890 – flat pieces manufactured in bulk that folded into boxes. Gair's invention came about as a result of an accident: he was a Brooklyn printer and paper-bag maker during the 1870s, and one day, while he was printing an order of seed bags, a metal ruler normally used to crease bags shifted in position and cut them. Gair discovered that by cutting and creasing in one operation he could make prefabricated paperboard boxes. Applying this idea to corrugated boxboard was a straightforward development when the material became available in the early twentieth century.[3]

The corrugated box was initially used for packaging glass and pottery containers. Later, in the mid-1950s, the case enabled fruit and produce to be brought from the farm to the retailer without bruising, improving the return to the producers and opening up export markets.

Several properties and characteristics can be measured for corrugated board. Included are;

Corrugated fiberboard has a higher stiffness (resistance to bending) than flat fiberboard of equal mass, especially parallel to the corrugations. This can be explained by the Theorema Egregium. The pleated board is roughly isometric to a flat plane, which has a Gaussian curvature of 0. Since the material is curved in one direction, perpendicular to the pleats, it must remain flat in the direction parallel to the pleats.

Corrugated board is manufactured on large high-precision machinery lines called corrugators, usually running at about 500 feet per minute (150 m/min) or more. These machines, over time, have become very complex with the objective of avoiding some common problems in corrugated board production, such as warp and washboarding.

The key raw material in corrugating is paper, different grades for each layer making up the corrugated box. Due to supply chain and scale considerations, paper is produced in separate plants called paper mills. Most corrugating plants keep an inventory of paper reels.

In the classical corrugator, the paper is softened with high-pressure steam. After the board is formed it is dried in the so-called dry-end. Here the newly formed corrugated board is heated from the bottom by hot plates. On the top, various pressures are applied by a load system on the belt.

The corrugated medium is often 0.026 pounds per square foot (0.13 kg/m2) basis weight in the U.S.; in the UK, a 90 grams per square metre (0.018 lb/sq ft) fluting paper is common. At the single-facer, it is heated, moistened, and formed into a fluted pattern on geared wheels. This is joined to a flat linerboard with a starch based adhesive to form single face board. At the double-backer, a second flat linerboard is adhered to the other side of the fluted medium to form single wall corrugated board. Linerboards are test liners (recycled paper) or kraft paperboard (of various grades). The liner may be bleached white, mottled white, colored, or preprinted.

Common flute sizes are "A", "B", "C", "E" and "F" or microflute. The letter designation relates to the order that the flutes were invented, not the relative sizes. Flute size refers to the number of flutes per linear foot, although the actual flute dimensions for different corrugator manufacturers may vary slightly. Measuring the number of flutes per linear foot is a more reliable method of identifying flute size than measuring board thickness, which can vary due to manufacturing conditions. The most common flute size in corrugated boxes is "C" flute.

The choice of corrugated medium, flute size, combining adhesive, and linerboards can be varied to engineer a corrugated board with specific properties to match a wide variety of potential uses. Double and triple-wall corrugated board is also produced for high stacking strength and puncture resistance.

Most corrugators are two knife corrugators, which means that they can produce two different sheet lengths side-by-side. This leads to an optimisation problem, known as the cutting stock problem.

Packaging engineers design corrugated boxes to meet the particular needs of the product being shipped, the hazards of the shipping environment, (shock, vibration, compression, moisture, etc.), and the needs of retailers and consumers.

The most common box style is the Regular Slotted Container (RSC). All flaps are the same length from the score to the edge. Typically, the longer major flaps meet in the middle and the minor flaps do not.

The manufacturer's joint is most often joined with adhesive but may also be taped or stitched. The box is shipped flat (knocked down) to the packager who sets up the box, fills it, and closes it for shipment. Box closure may be by tape, adhesive, staples, strapping, etc.

The size of a box can be measured for either internal (for product fit) or external (for handling machinery or palletizing) dimensions. Boxes are usually specified and ordered by the internal dimensions.

A seal printed on an outside surface, typically the bottom of the box, that includes some information about how strong the box is. This is also known as the Box Maker's Certificate or Box Certificate. The certificate is not required, but it if is used that implies compliance with regulations relating to the certificate.[6] Significant information includes: 1) Bursting Test or Edge Crush Test; 2) Size Limit (the maximum outside dimensions of a finished box when the length, width and depth of the box are added together); 3) Gross Weight Limit.[7][8]

Boxes can be formed in the same plant as the corrugator. Such plants are known as "integrated plants". Part of the scoring and cutting takes place in-line on the corrugator. Alternatively, sheets of corrugated board may be sent to a different manufacturing facility for box fabrication; these are sometimes called "sheet plants".

The corrugated board is creased or scored to provide controlled bending of the board. Most often, slots are cut to provide flaps on the box. Scoring and slotting can also be accomplished by die-cutting.

A limitation of common corrugated material has been the difficulty in applying fine graphic print for informative and marketing purposes. The reasons for this stem from the fact that prefabricated corrugated sheets are relatively thick and spongy, compared to the thin and incompressible nature of solid fibre paper such as paperboard. Due to these characteristics of corrugated, it has been mainly printed using a flexographic process, which is by nature a coarse application with loose registration properties.

A more recent development popular in usage is a hybrid product featuring the structural benefits of corrugated combined with the high-graphics print of lithography previously restricted to paperboard folding cartons. This application, generally referred to as 'Single-Face Laminate', begins its process as a traditional fluted medium adhered to a single linerboard (single-face), but in place of a second long-fibered liner, a pre-printed sheet of paperboard such as SBS (solid bleached sulfate) is laminated to the outer facing. The sheet can then be converted with the same processes used for other corrugated manufacturing into any desired form.

Specialized equipment is necessary for the material construction of SFL, so users may expect to pay a premium for these products. However, this cost is often offset by the savings over a separate paperboard sleeve and the labor necessary to assemble the completed package.

Old corrugated containers are an excellent source of fiber for recycling. They can be compressed and baled for cost effective transport. The baled boxes are put in a hydropulper, which is a large vat of warm water for cleaning and processing. The pulp slurry is then used to make new paper and fiber products.

Mill and corrugator scrap, or broke, is the cleanest source for recycling. The high rates of post-consumer recycling reflect the efficiency of recycling mills to clean and process the incoming materials. Several technologies are available to sort, screen, filter, and chemically treat the recycled paper.

Many extraneous materials are readily removed. Twine, strapping, etc. are removed from the hydropulper by a "ragger". Metal straps and staples can be screened out or removed by a magnet. Film-backed pressure-sensitive tape stays intact: the PSA adhesive and the backing are both removed together.[9]

Materials which are more difficult to remove include wax coatings on corrugated boxes and "stickies", soft rubbery particles which can clog the paper maker and contaminate the recycled paper. Stickies can originate from book bindings, hot melt adhesives, pressure-sensitive adhesives from paper labels, laminating adhesives of reinforced gummed tapes, etc.[10][11]

Corrugated fiberboard shredders are now available which convert post-consumer corrugated board into packing/cushioning materials by means of a specialized shredding process.