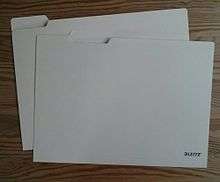 Two manila folders made by Leitz 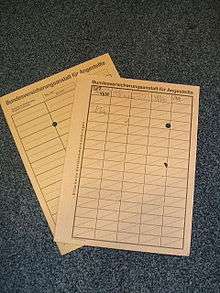 The manila folder is a file folder designed to contain documents. It is generally formed by folding a large sheet of stiff card in half. Though traditionally buff, sometimes other colors are used to differentiate categories of files.

The manila envelope is a specific colored envelope designed for transporting documents. It is made of thick, durable Manila paper and sized so that full sheets of paper can fit inside without being folded. As with the manila folder, it is traditionally buff in color, and often has a mechanism on the closing flap that allows it to be opened without damaging the envelope so that the envelope can be re-used. There are two main methods to achieve this—the first incorporates a metal clasp of two prongs, which are put through a reinforced eyelet in the flap and then bent apart to hold. The other has a cardboard "button" secured tightly on the flap and a piece of string fastened on the envelope body (or the reverse arrangement) is wound around it to form a closure. In a more general sense, envelopes made of brown, unbleached paper, used for cheapness, are described as manila envelopes.

The manila component of the name comes from manila hemp or abacá, from which manila folders were originally made.

Manila envelope dimensions as accepted by US Postal Service are: