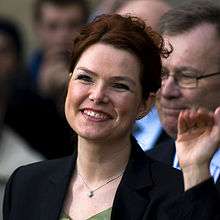 Inger Støjberg at her appointment as minister

Inger Støjberg (born 16 March 1973) is a Danish Minister for Immigration, Integration and Housing[1] since June 2015. She has been member of parliament since the 2001 elections for the party Venstre. She has been Minister of Employment.[2]

In 1999 she graduated from InformationsAkademiet, and was editor of Viborg's local newspaper from 1999 until 2001 when she became a freelance journalist in her own company, Støjberg Kommunikation.

Støjberg's first elected office was as member of the city council of Viborg Municipality, a position she occupied 1994—2002. She served as chairman of Liberalt Oplysnings Forbund (LOF) from 1996 to 1999.

Støjberg has previously called herself "a trained journalist" but was forced to revise her resume, as she does not have such an education.[3]