Venstre is the major party of the centre-right in Denmark, and the third largest party in the country. The party has produced many Prime Ministers. Denmark's current government is a minority government consisting of Venstre alone, supported by the other right wing parties. In the 2015 parliamentary elections, Venstre received 19.5% of the vote, and 34 out of 179 seats. It is led by Lars Løkke Rasmussen, who took over as party leader and Prime Minister from Anders Fogh Rasmussen when the latter became Secretary General of NATO in 2009.

The party is a member of Liberal International and the Alliance of Liberals and Democrats for Europe (ALDE). One of Denmark's thirteen MEPs are from Venstre in the 2014-19 term of office, and they sit with the ALDE Group in the European Parliament.[10]

Venstre is categorised as centre-right on the political spectrum.[3] It is a market liberal party[11] within the Nordic agrarian tradition,[12] and today is notably more pro-free market than its sister parties.[13] Some describe it as classical liberal, since its leader from 1998 to 2009, Anders Fogh Rasmussen, is known for his authorship of the book From Social State to Minimal State. His book advocated an extensive reform of the Danish welfare state along classical liberal lines, including lower taxes and less government interference in corporate and individual matters.

Since the elections in 2001, Venstre has enacted a so-called "tax stop" in order to halt the growth in taxes seen during the previous eight years under the Social Democrats. This tax stop has been under heavy fire from the parties on the left wing of Danish politics, allegedly for being "asocial" and "only for the rich." 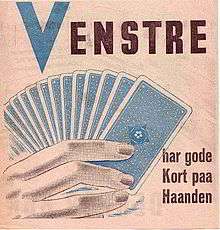 Venstre 1945 election material ("Venstre has been dealt a good hand")

Venstre, or "the Left" in English, was founded in 1870 under the name Det Forenede Venstre (The United Left). It was formed through the merger of three parliamentary factions, all of whom had identified as leftist in the context of the time. From 1895–1910 it was known as Venstrereformpartiet (Left Reform Party), and after that as Venstre.

Venstre was traditionally a party advocating free trade and farmers' interests as opposed to the interests of the aristocracy which were the platform of the other conservative party Højre (The Right). This traditional landed basis resulted in a relative decline in influence due to the rapidly accelerating urbanisation of Danish society. Starting in the 1880s, the party began expanding into urban regions as well.

By the 1910s, the splitting off of the Social Liberals and the appearance of the Social Democrats had pushed Venstre toward the centre, and it often relied on its former Conservative adversaries for parliamentary support. After the 1960s Venstre was reoriented as a more classical liberal party. During the leadership of Anders Fogh Rasmussen, the party turned further to the right.

The fact that the major centre-right political party in a country calls itself 'Left' is often confusing to many foreign (and sometimes Danish) observers. The name has, however, its historical explanation. At the time of its foundation, Venstre affirmed progressive ideas in the then Danish parliament. Their opponents, Højre (Right), the forerunner of the present-day Conservative People's Party, advocated for established interests, particularly the Church of Denmark and the landed gentry. In current Danish politics there is a clear distinction between the concepts of Venstre (Left, i.e. the party bearing that name) and venstrefløj (left wing, i.e. socialist and other left-leaning parties). The use of the word for "left" in the name of the Danish political party Radikale Venstre and the Norwegian party Venstre is meant to refer to liberalism and not socialism.

Members of the party are referred to as venstremænd and venstrekvinder, respectively "Venstre men" and "Venstre women" (singular: -mand / -kvinde).