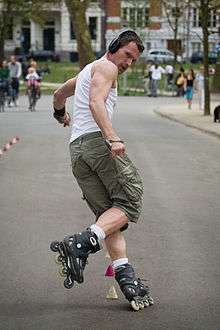 A man inline skating at Vondelpark in Amsterdam.

Inline skating is a sport practiced widely internationally. Inline skates typically have 2 to 5 polyurethane wheels, arranged in a single line, although 5 wheel designs are no longer manufactured. The in-line design allows for greater speed than roller skates and better maneuverability. The in-line wheels are coupled with boots designed for skating over and around various obstacles. Inline-skating is practiced and performed using inline skates designed for race tracks, skate parks, Urban areas, and off-road.

Inline skating is also known as "roller blading" due to the popular brand of inline skates, Rollerblade. 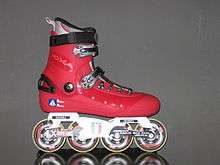 A term used to refer to inline skates on a vert ramp, a half pipe with some vertical in it usually between 6in to 24in. Vert skating is a form of gymnastics performed with skates. The purpose of vert skating is to ride higher than the coping (which is the metal pipe on top of the ramp) and perform spins or flips. It focuses on complicated hard aerial maneuvers, such as spins and flips. The intent of the skater is to build speed until they are of sufficient height above the edge of the ramp to perform various aerial acrobatics. In competitions skaters have limited time, often less than a minute, to impress the judges by landing numerous and difficult tricks. The sport was included in the first X Games in 1995. Vert skating is used in a lot of competitions such as the X Games. Vert ramps are also present in most skateparks of today.

In addition to speed, fitness, artistic, or skating for fun, some skaters prefer to skate aggressively. Aggressive skating is referred to by participants as rollerblading, blading, skating or rolling and refers to not only the variety of maneuvers that include a variety of grinds, airs, cess slides, toe/heel rolls and other advanced skating stunts but also the equipment used. Aggressive skates are rollerblades that include aspects of the skate that facilitates grinds, this includes a plastic frame with a space in the middle for grinding, and, sole plates that allow the practitioner to grind on the side of the boot. Types of aggressive skating include Park and Street.

Park skating refers to doing tricks within a skatepark, meaning a space that is designed for skating, designed and laid out as such. Street skating specifically refers to tricks performed on non-allocated obstacles (i.e. not skate parks).

Freestyle skating is a form of inline skating performed on flatland and refers collectively to the disciplines for which competitions are organized by the International Freestyle Skaters Association.[1] Currently the IFSA has defined three disciplines which must be offered by any competition they sanction: freestyle slalom, speed slalom, and free jump. Two additional disciplines, high jump and jam, are also defined, but are at present considered optional.

Hockey performed in a special rink on inline skates Originally thought up by ice hockey players who wanted to continue training in their off season.