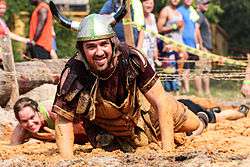 An obstacle racer, dressed in costume, crawls through a mud pit topped with barbed wire.

Obstacle course racing (OCR) is a sport in which a competitor, traveling on foot, must overcome various physical challenges that are in the form of obstacles. Mud and trail runs are combined and the races are designed to result in mental and physical collapse.[1] Obstacles include, but are not limited to, climbing over walls, carrying heavy objects, traversing bodies of water, crawling under barbed wire, and jumping through fire. Many obstacles are similar to those used in military training, while others are unique to obstacle racing and are employed throughout the course to test endurance, strength, speed and, dexterity. Races vary in both distance and challenge level, combining trail running, road running, and cross country running.[2] With race venues typically in large cities, organizers encourage athletes of all types to participate. All Obstacles were introduced into Cross Country Running at Tough Guy, recorded on video 1989 - 2007. Most signature obstacles were actually created by Mr Mouse. According to the Los Angeles Times in 2012, the number of events—typically all-day festivals—rose rapidly. In accordance with the sub-culture's fast rate of growth, the Obstacle Race Magazine was launched.[3]

From the stadion, the oldest event of the Olympic Games, to the contemporary era steeplechase, obstacles of some sort have been presented to athletes for thousands of years. The concept of using obstacles for an endurance event is a contemporary phenomenon. It is widely thought that Tough Guy is the oldest obstacle course race, with the first race in 1987. All video recorded 1989 thro 2009[4]

In 2011, approximately one million people registered to participate in obstacle racing events in the United States (US) alone.[5] 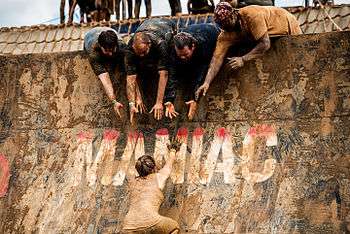 Rugged Maniac was founded in 2010 by former lawyers Brad Scudder and Rob Dickens. The very first race was held in October 2010, in Southwick, Massachusetts. It has since expanded to 24 cities over the United States and Canada.[6]

In 2014, they were featured on ABC's Shark Tank and secured a $1.75 million deal with Mark Cuban, the billionaire entrepreneur and owner of the Dallas Mavericks.[7] On January 16, 2016, Rugged Maniac (Under their company name Rugged Races LLC), appeared again on Shark Tank in an update video.[8] Since first appearing on the show, the Rugged Maniac event has expanded to Canada, increased in sales from $4.2 million to $10.5 million before and after Shark Tank, expanded to 28 cities, and created a second race called "The Costume Dash 5K", which debuted in Boston in October 2015.[9][10]

Rugged Maniac features 25 obstacles over a 5 kilometer (3.1 mile) course. It is designed to be more family-friendly and catered to people of all fitness levels, due to the shorter distance but larger number of obstacles. The run ends with an all-day festival of beer, food, mechanical bull riding, adult-sized bounce houses, and sponsor exhibition booths.[11]

Spartan Race courses vary in distance and difficulty from 3+ mile "Sprint" courses, to 8+ mile "Super" courses, to the 13+ mile "Spartan Beast". Average finishing times for the events range from 30 minutes to 6 hours, depending on the particular course and fitness level of the racer. Race venues have included ski slopes, state parks, paint ball parks, and more. Any competitor who completes all three race distances is said to have completed the Spartan Trifecta.[14] The Spartan Beast, which is held in Killington, VT serves as the Championship event each year, with a $20,000 prize purse.

In 2010, Tough Mudder's first event was held in May 2010. The Tough Mudder is not technically a race and is instead focused on teamwork and completion of the event rather than finishing under a certain time.

Tough Mudder courses are between 10 and 12 miles and contain various military style obstacles.

As a shorter event, winning times for a Warrior Dash may be as short as 15 minutes. While Warrior Dash features many of the same obstacles found at other races such as mud crawls, water features, and cargo net climbs.

The sport's first independent World Championship took place on October 25 & 26 2014 in Cincinnati, Ohio. It was won by UK's Jonathan Albon, who successfully defended his crown in 2015. [15]

Each BattleFrog features an 8 km course and at least twenty-five obstacles.[16]

In August 2016, BattleFrog canceled their remaining events for the season and no longer offers obstacle course races.[17]

First staged in 1987, Tough Guy claims to be the first official and toughest obstacle course race in the world. It is held on the last Sunday in January in Perton, Staffordshire, UK. The race is held twice a year in winter and summer. The winter event requires competitors to compete in near freezing temperatures and contend with ice and snow. The 2013 event was won by Knut Höhler[4][18]

Bog Commander combines fell running with obstacle course racing and mud running. Set on a working hill farm in the spectacular Peak District, this course has been described as "extreme" and "brutal" by its participants. Terrain varies from 1200 ft to 1500 ft and includes natural bogs, river runs, massive hills and rough terrain. Man made obstacles complete the challenge.[19]

Founded in Cyprus in 2013, Legion Run is the only obstacle course based in south-eastern Europe. With a motto of ‘We are Legion, we are one of many, we are you’, this non-competitive event emphasizes teamwork and overcoming personal challenges. Legion Run has held successful events in Cyprus, Bulgaria, Greece and Hungary, and has quickly established itself as a favourite in the region, particularly amongst members of the CrossFit and combat sport communities, as well as corporations, armed forces and other organized teams. The first non-European Legion Run events will be held in 2015.

Legion Run involves a 5 km course with at least 15 obstacles, along with a parallel all-day festival for both participants and spectators. Every participant that crosses the finish line is awarded an exclusive ‘I Am Legion’ T-shirt and a well-deserved beer. In keeping with the team spirit of the event, there are no individual prizes or distinctions, however many participants choose to time themselves.[20]

Jeep Warrior Race[23] is South Africa’s largest obstacle course race with up to 9000 participants per event. The Warrior Race offers race distances ranging from 5 to 17 kilometers.