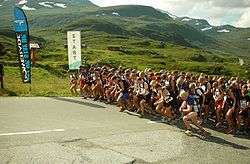 The start of a mountain running championship in Norway

Fell running, sometimes known as hill running or mountain running, is the sport of running and racing, off road, over upland country where the gradient climbed is a significant component of the difficulty. The name arises from the origins of the English sport on the fells of northern Britain, especially those in the Lake District.

Fell races are organized on the premise that contenders possess mountain navigation skills and carry adequate survival equipment as prescribed by the organizer. 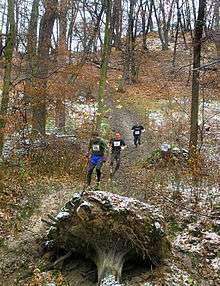 A hill-running race in Prague

The first recorded hill race took place in Scotland.[1] King Malcolm Canmore organised a race in Braemar in 1040 or perhaps as late as 1064, reputedly to find a swift messenger. This event appears to have been a precursor to the Braemar Gathering. There is no documented connection between this event and the fell races of the 19th century.

From the 19th century records survive of fell races taking place as a part of community fairs and games. The sport was a simple affair and was based upon each community's values for physical ability. Fell races took place alongside other sports such as wrestling, sprint races and (especially in Scotland) heavy events such as throwing the hammer. These fairs or games events were often commercial as well as cultural, with livestock shows and sales taking place alongside music, dancing and sports. In a community of shepherds and agricultural labourers comparisons of speed and strength were interesting to spectators as a source of professional pride for competitors. A fast shepherd or a strong labourer were as respected, one imagines, as any top-ranking colleague in a more "modern" employment. The most famous of these events in England, the Grasmere Sports meeting in the Lake District, with its Guide's Race, still takes place every year in August.

The Fell Runners Association started in April 1970 to organise the duplication of event calendars for the amateur sport. As of 2013 it administers amateur fell running in England, in affiliation with UK athletics. Separate governing bodies exist for each country of the United Kingdom and each country has its own tradition of fell running, though the sport is largely the same. The most important races of the year include the Ben Nevis Race in Scotland, run regularly since 1937, and the Snowdon Race in Wales.

Overlap with other sports

Fell running is often known as hill running, particularly in Scotland.[2] It is sometimes called mountain running, as in the name of the Northern Ireland Mountain Running Association[3] although the term mountain running often has connotations of WMRA races which tend to be on smoother, drier trails and lack the route choice which may be available in fell races.[4]

Modern fell running has common characteristics with cross country running. Fell race courses are often longer, steeper and unmarked when out on the hills (with a few exceptions). Fell running also overlaps with orienteering. Courses are again typically longer but with less emphasis on navigation. Fell running does sometimes require navigational skills in a mountainous environment, particularly in determining and choosing between routes, and poor weather may increase the need for navigation. However, in most fell races, the route or sequence of checkpoints is published beforehand and runners may reconnoitre the course to reduce the risk of losing time working out where to run during the race.[5] Category O events and Mountain Marathons (see also below), test navigational ability, attracting both orienteers and fell runners. Other multi-terrain events, such as the Cotswold Way Relay and the Longmynd Hike, also qualify as fell races under Fell Runners Association rules.

Some fell running could also be classed as trail running. Trail running normally takes place on good paths or tracks which are relatively easy to follow and does not necessarily involve the significant amounts of ascent that are required in fell running.[6]

Fell running does not involve rock climbing and routes are subject to change if ground nearby becomes unstable. A small number of fell runners who are also rock climbers, nevertheless do attempt records traversing ridges that allow running and involve scrambling and rock climbing – particularly where the record is 24 hours or less. Foremost of these in the UK is probably the traverse of the Cuillin Main Ridge on Skye, and the Greater Traverse, including Blaven.

The first British Fell Running Championships, then known as Fell Runner of the Year, were held in 1972 and the scoring was based on results in all fell races. In 1976 this was changed to the runner's best ten category A races and further changes took place to the format in later years. Starting with the 1986 season, an English Fell Running Championships series has also taken place, based on results in various races of different lengths over the year.[7]

The winners of the British Championships have been as follows.[8]

The winners of the English Championships have been as follows.[9]

Race records vary from a few minutes to, generally, a few hours. The longest common fell running challenges tend to be rounds to be completed within 24 hours, such as the Bob Graham Round. Some of the mountain marathons do call for pairs of runners to carry equipment and food for camping overnight. Longer possible routes do exist, such as an attempt at a continuous round of Munros. Mountaineers who traverse light and fast over high Alpine, Himalayan or through other such continental, high altitudes are considered alpine style mountaineers by fell runners.

Races run under the FRA Rules For Competition of the Fell Runners Association[10] are categorised by the amount of ascent and distance.

Modern fell running trainers use light, non-waterproof material to eject water and dislodge peat after traversing boggy ground. While the trainer needs to be supple, to grip an uneven, slippery surface, a degree of side protection against rock and scree (loose stones) may be provided. Rubber studs have been the mode for two decades, preceded by ripple soles, spikes and the flat soled ‘pumps’ of the fifties.

Most fell running regions have their own challenges or "rounds":