An integer programming problem is a mathematical optimization or feasibility program in which some or all of the variables are restricted to be integers. In many settings the term refers to integer linear programming (ILP), in which the objective function and the constraints (other than the integer constraints) are linear.

Integer programming is NP-hard. A special case, 0-1 integer linear programming, in which unknowns are binary, and only the restrictions must be satisfied, is one of Karp's 21 NP-complete problems.

Canonical and standard form for ILPs

An integer linear program in canonical form is expressed as:[1]

and an ILP in standard form is expressed as

where the entries of

is a matrix, having integer values. Note that similar to linear programs, ILPs not in standard form can be converted to standard form by eliminating inequalities by introducing slack variables ( 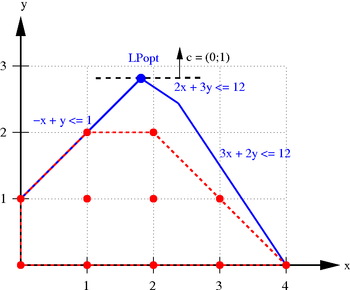 The graph on the right shows the following problem.

The feasible integer points are shown in red, and the red dashed lines indicate their convex hull, which is the smallest polyhedron that contains all of these points. The blue lines together with the coordinate axes define the polyhedron of the LP relaxation, which is given by the inequalities without the integrality constraint. The goal of the optimization is to move the black dotted line as far upward while still touching the polyhedron. The optimal solutions of the integer problem are the points

which both have an objective value of 2. The unique optimum of the relaxation is

with objective value of 2.8. Note that if the solution of the relaxation is rounded to the nearest integers, it is not feasible for the ILP.

The following is a reduction from minimum vertex cover to integer programming that will serve as the proof of NP-hardness.

be an undirected graph. Define a linear program as follows:

Given that the constraints limit

to either 0 or 1, any feasible solution to the integer program is a subset of vertices. The first constraint implies that at least one end point of every edge is included in this subset. Therefore, the solution describes a vertex cover. Additionally given some vertex cover C,

thus giving us a feasible solution to the integer program. Thus we can conclude that if we minimize the sum of

we have also found the minimum vertex cover.[2]

Mixed integer linear programming (MILP) involves problems in which only some of the variables,

, are constrained to be integers, while other variables are allowed to be non-integers.

Zero-one linear programming involves problems in which the variables are restricted to be either 0 or 1. Note that any bounded integer variable can be expressed as a combination of binary variables.[3] For example, given an integer variable,

, the variable can be expressed using

Example problems that can be formulated as ILPs

A large number of problems can be formulated as ILPs. These include

There are two main reasons for using integer variables when modeling problems as a linear program:

These considerations occur frequently in practice and so integer linear programming can be used in many applications areas, some of which are briefly described below.

Mixed integer programming has many applications in industrial production, including job-shop modelling. One important example happens In agricultural production planning involves determining production yield for several crops that can share resources (e.g. Land, labor, capital, seeds, fertilizer, etc.). A possible objective is to maximize the total production, without exceeding the available resources. In some cases, this can be expressed in terms of a linear program, but variables must be constrained to be integer.

These problems involve service and vehicle scheduling in transportation networks. For example, a problem may involve assigning buses or subways to individual routes so that a timetable can be met, and also to equip them with drivers. Here binary decision variables indicate whether a bus or subway is assigned to a route and whether a driver is assigned to a particular train or subway.

The goal of these problems is to design a network of lines to install so that a predefined set of communication requirements are met and the total cost of the network is minimal.[4] This requires optimizing both the topology of the network along with the setting the capacities of the various lines. In many cases, the capacities are constrained to be integer quantities. Usually there are, depending on the technology used, additional restrictions that can be modeled as a linear inequalities with integer or binary variables.

The task of frequency planning in GSM mobile networks involves distributing available frequencies across the antennas so that users can be served and interference is minimized between the antennas.[5] This problem can be formulated as an integer linear program in which binary variables indicate whether a frequency is assigned to an antenna.

The naive way to solve an ILP is to simply remove the constraint that x is integer, solve the corresponding LP (called the LP relaxation of the ILP), and then round the entries of the solution to the LP relaxation. But, not only may this solution not be optimal, it may not even be feasible, that is it may violate some constraint.

While in general the solution to LP relaxation will not be guaranteed to be optimal, if the ILP has the form

have all integer entries and

be an arbitrary basic feasible solution . Since

is feasible, we know that

. By definition of a basis, there is some square submatrix

with linearly independent columns such that

Since the columns of

are linearly independent and

is nonsingular, and therefore by assumption,

is unimodular and so

is nonsingular, it is invertible and therefore

denotes the adjugate of

and is integral because

Thus, if the matrix

of an ILP is totally unimodular, rather than use an ILP algorithm, the simplex method can be used to solve the LP relaxation and the solution will be integer.

is not totally unimodular, there are a variety of algorithms that can be used to solve integer linear programs exactly. One class of algorithms are cutting plane methods which work by solving the LP relaxation and then adding linear constraints that drive the solution towards being integer without excluding any integer feasible points.

Lenstra in 1983 showed [6] that, when the number of variables is fixed, the feasibility integer programming problem can be solved in polynomial time.

Since integer linear programming is NP-hard, many problem instances are intractable and so heuristic methods must be used instead. For example, tabu search can be used to search for solutions to ILPs.[7] To use tabu search to solve ILPs, moves can be defined as incrementing or decrementing an integer constrained variable of a feasible solution, while keeping all other integer-constrained variables constant. The unrestricted variables are then solved for. Short term memory can consist of previous tried solutions while medium term memory can consist of values for the integer constrained variables that have resulted in high objective values (assuming the ILP is a maximization problem). Finally, long term memory can guide the search towards integer values that have not previously been tried.

Other heuristic methods that can be applied to ILPs include

There are also a variety of other problem-specific heuristics, such as the k-opt heuristic for the travelling salesman problem. Note that a disadvantage of heuristic methods is that if they fail to find a solution, it cannot be determined whether it is because there is no feasible solution or whether the algorithm simply was unable to find one. Further, it is usually impossible to quantify how close to optimal a solution returned by these methods is.