For other uses, see Interception (disambiguation). 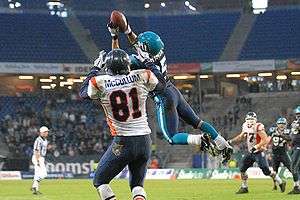 Brent Grimes of the Hamburg Sea Devils intercepting a pass

In ball-playing competitive team sports, an interception or pick is a move by a player involving a pass of the ball—whether by foot or hand, depending on the rules of the sport—in which the ball is intended for a player of the same team but caught by a player of the opposing team, who thereby usually gains possession of the ball for their team. It is commonly seen in football, including Canadian and American football, as well as association football, rugby league, rugby union, Australian rules football and Gaelic football, as well as any sport in which a loose object is passed between players toward a goal, including ice hockey, field hockey, basketball and lacrosse.

In American or Canadian football, an interception occurs when a forward pass is caught by a player of the opposing team. This leads to an immediate change of possession during the play: the defender who caught the ball immediately attempts to move the ball as far towards the opposing end zone as possible. Following the stoppage of play, if the interceptor retained possession of the ball, his team takes over possession at the spot where he was downed.

Interceptions are predominantly made by the secondary or (on some occasions) the linebackers, who are usually closest to the quarterback's intended targets, the wide receivers, running backs, and tight ends. Less frequently, a defensive lineman may get an interception from a tipped ball, a near sack, a shovel pass, or a screen pass, but are more likely to force a fumble than get an interception. As soon as a pass is intercepted, everyone on the defense immediately acts as blockers, helping the person with the interception get as much yardage as possible and perhaps a touchdown (commonly called a "pick six"); at the same time, everyone on the offense becomes the defense and may attempt to tackle the ball-carrier. If the interception occurs on an extra point attempt, rather than an ordinary play from scrimmage, a potential return of the interception to the other end zone is sometimes called a "pick two" as it would be a defensive two point conversion rather than a touchdown. For example, on December 4, 2016, the Kansas City Chiefs strong safety Eric Berry scored the game winning points via a pick two in a 29-28 victory over the Atlanta Falcons. Berry also achieved an ordinary pick six earlier in the same game.[1]

If the intercepting team can run out the clock, the intercepting player may down the ball immediately and not attempt to gain any yardage. This eliminates the chance of a fumble that could be recovered by the other team. There are also player safety implications: when the ball is turned over, the play is now suddenly and unexpectedly moving in the opposite direction. All of the players on offense are instantly susceptible to unexpected blocks, even if not attempting to stop the ball carrier; a hard and unseen block can result in severe injuries. Additionally, offensive players, particularly the quarterback, are often inexperienced tacklers and are at risk of injuring themselves while tackling the ball carrier.

Lester Hayes of the Oakland Raiders was one of the National Football League's (NFL) leaders at interceptions in the late 1970s and early 1980s. He was known for covering his chest, shoulders and forearms with a copious amount of the adhesive Stickum to help him hold on to the ball. After the NFL outlawed the use of such foreign substances in 1981, Hayes' success rate at interceptions dropped below average though that could be due to his reputation as a "shutdown cornerback", which discouraged opposing teams from throwing to his side of the field. He continued to use the substance, which he called "pick juice", by having it applied in smaller amounts to his wrists.

Paul Krause holds the record for most career interceptions, with 81, and is tied for third place for most interceptions by an NFL rookie in his first season, with 12. He played his first three years in the NFL from 1964 to 1967 with the Washington Redskins but was traded to the Minnesota Vikings, where he spent most of his career. Krause played until 1979 and appeared in four Super Bowls with the Vikings. He was inducted into the Pro Football Hall of Fame in 1998.

Rod Woodson played 16 seasons with Pittsburgh, San Francisco, Baltimore, and Oakland, and holds the NFL record for most interception returns for touchdown in an NFL career with 12. Also, he holds the NFL record for most total defensive TD returns in a career with 13. Woodson, who is third on the NFL all-time career interception list with 71, was inducted into the Hall of Fame in 2009.

Former New Orleans Saints safety Darren Sharper, most notable for playing 8 seasons with the Green Bay Packers and the Minnesota Vikings from 2005 to 2008, has a career total of 63 interceptions, and has returned 11 of those for touchdowns. Sharper holds the NFL record for interception return yardage in a single season with 376 yards in 2009. He is also tied with Rod Woodson for most total defensive TD returns career with 13.

Ty Law, formerly of the New England Patriots, New York Jets, and Kansas City Chiefs, has 52 career interceptions. Champ Bailey, who played for the Washington Redskins and Denver Broncos, had 10 interceptions in 2006 and has a career total of 52. Strong safety Sammy Knight had 42 interceptions in his career.

Brett Favre holds the record for most career interceptions thrown: 336. Favre's first pass in an NFL regular season game resulted in an interception returned for a touchdown. Favre's last pass as a Green Bay Packer was an INT as well thrown to Corey Webster of the New York Giants in the 2007 NFC Championship Game to lose the game.[2]

Rodney Harrison of the New England Patriots and San Diego Chargers was the first player in NFL history to have 30 interceptions and 30 sacks over the course of his career. He set that historic benchmark on October 21, 2007. The Baltimore Ravens' Ray Lewis was the second to accomplish this feat. He recorded his 30th interception November 21, 2010, intercepting the Carolina Panthers' Brian St. Pierre and returning the ball for a touchdown. Lewis is also the only member of the 40/30 club (at least 40 sacks and at least 30 interceptions).

On November 21, 2010 Ronde Barber became the only player in NFL history with at least 25 sacks (26 total) and 40 interceptions with a 21–0 win over the San Francisco 49ers. His jersey and gloves from the game were subsequently retired to the Pro Football Hall of Fame in Canton.

Asante Samuel of the Atlanta Falcons, with 4 postseason INT returns for a TD, is the NFL's all-time leader. 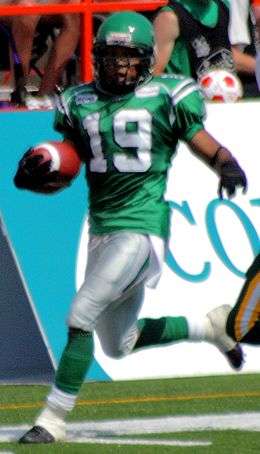 James Harrison of the Pittsburgh Steelers set the record for the longest interception return for a touchdown in a Super Bowl in Super Bowl XLIII. The NFL's Defensive Player of the Year Harrison picked off Kurt Warner's pass and returned it a Super Bowl-record 100 yards for a touchdown on the final play of the first half to give the Pittsburgh Steelers a 17–7 lead over the Arizona Cardinals.

On October 6, 2013 Matt Schaub became the first quarterback to throw a "pick-six" (an interception returned for a touchdown) in four consecutive games, while playing against the San Francisco 49ers.

James Johnson was named the Outstanding Player of the 95th Grey Cup on November 25, 2007, after intercepting a record three passes, including one for a 30-yard touchdown. His defensive efforts helped lead the Saskatchewan Roughriders to a 23–19 victory over their CFL Prairie rival Winnipeg Blue Bombers. This was the first time since 1994 that a defensive player was awarded the Grey Cup's top individual title. His most notable interception of the game was when he intercepted Ryan Dinwiddie's final pass and secured Saskatchewan's victory.

Robert Hardwick of the Nottingham Caesars of the BAFA National Leagues scored a game-winning touchdown against the Birmingham Bulls on May 15, 2016. The Bulls were three points up at the four-yard line with 14 seconds left on the clock, and elected to throw a pass which was intercepted and run 100 yards to the opposite end zone.