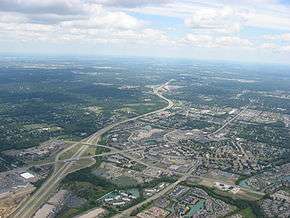 Double interchange on the southern half of Interstate 675

Interstate 675 (I-675) is an auxiliary interstate highway in the suburbs of Dayton in the U.S. state of Ohio. Interstate 675 serves as an eastern bypass of Dayton. I-675 measures 26.53 miles (42.70 km) in length. As originally proposed, the route was to reconnect with I-75 north of Dayton near Northridge rather than going east towards Springfield and I-70 (this was later rejected because part of the right-of-way would have gone through Wright-Patterson Air Force Base). Construction was completed in 1987, though some have lobbied to extend the highway west of Dayton.

Template:Attached KML/Interstate 675 (Ohio)
KML is from Wikidata
This article is issued from Wikipedia - version of the 9/11/2016. The text is available under the Creative Commons Attribution/Share Alike but additional terms may apply for the media files.