Interstate 275 (I-275) is an 83.71-mile-long (134.72 km)[1] loop in Ohio, Indiana, and Kentucky that forms a complete beltway around the Cincinnati, Ohio, area. It is the only auxiliary interstate that enters three states, including one state that the parent route does not enter (Indiana). It is the longest loop interstate highway in the United States,[2] and it encloses an area of over 250,000 acres.[3] For a short distance in northwest Hamilton County it overlaps with I-74 and U.S. Highway 52 (US 52).

I-275 is signed as the Cincinnati By-Pass and officially known as the Donald H. Rolf Circle Freeway in Ohio, after a state senator,[4] but locals rarely use these names, instead simply referring to it as "two-seventy-five." In 2011, Kentucky named its segment the Ronald Reagan Highway, not to be confused with Ronald Reagan Cross County Highway across the river in Cincinnati.[5] The section in Clermont County is also designated as the Staff Sergeant Matt Maupin Veterans Memorial Highway. 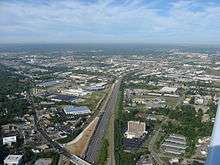 Along I-275 on its northeast side

I-275 heads northeast towards Springdale. I-275 has a short concurrency with I-74. When the concurrency ends, I-275 has an intersection with Ohio State Route 126 (SR 126, Ronald Reagan Cross County Highway). Then I-275 has interchanges with US 27 and US 127. I-275 turns east having an interchange with SR 4, SR 747, I-75, and US 42. I-275 turns southeast having an interchange with I-71 and US 22/SR 3. I-275 passes through over the Little Miami River, entering Clermont County, where it is officially named in honor of Matt Maupin, a local soldier killed during the Iraq War. I-275 turns due south toward Milford and connects with SR 28, SR 450, SR 32, and SR 125. I-275 turns due west towards Kentucky, passing through a short concurrency with US 52, before crossing over the Ohio River into Kentucky.

On May 20, 2008, a tractor-trailer hauling a locomotive separated while traveling on the ramp from westbound I-74 to southbound I-275. After the trailer detached, it crashed into supports for the bridge on I-74 eastbound going over the ramps between I-275 and I-74 westbound. As a result, the Ohio Department of Transportation shut down eastbound I-74 for several weeks.[6] Both ramps between I-74 west and I-275 were closed as well, because of fears the bridge would collapse, but two crossovers were built so that traffic could use one lane of westbound I-74 to travel east around the damaged bridge.[7]

Template:Attached KML/Interstate 275 (Ohio–Indiana–Kentucky)
KML is from Wikidata
This article is issued from Wikipedia - version of the 9/11/2016. The text is available under the Creative Commons Attribution/Share Alike but additional terms may apply for the media files.