Irina Igorevna Antonenko (Russian: Ири́на И́горевна Анто́ненко; born 1 September 1991) is a Russian actress, model and beauty pageant titleholder who holds the title of Miss Russia 2010. She also placed in the Top 15 at the Miss Universe 2010 pageant held on August 23, 2010 in Paradise, Nevada.

Irina Antonenko was born on 1 September 1991 in Sverdlovsk, Russian SFSR, Soviet Union. Her parents, Natalia and Igor Antonenko, were both employees of the police. She completed her high school education in school No. 156. According to the school director, Irina was "a very modest and polite girl."[1] Whilst studying at the school, Antonenko entered her first beauty pageant, in which she failed to make the top three.[2] After finishing high school, she began to study finance at the Ural Finance and Jurisprudence Institute, around the same time, she also started her modelling career.[1]

He is a student of Russian University of Theatre Arts, making the first steps in film and on stage.

In 2009, having won the title "Miss Yekaterinburg", Irina decided to go to Moscow to the national beauty contest. In mid-February 2010 it sent to the capital to take part in the preparations for the finals of "Miss Russia".[3] 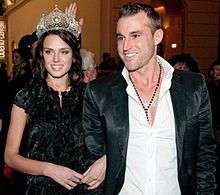 Antonenko and fashion designer Philipp Plein in March 2010 in Moscow

On 6 March 2010, Antonenko was crowned Miss Russia 2010 in a contest held in Moscow. The crown was handed over to her by outgoing titleholder Sofia Rudieva. In addition to the crown, she received a cash prize of $100,000, which she plans to spend mostly on charity, to help children who are ill.[4] The jury concluded that there is more to Russia's new beauty than meets the eye, and that she has the brains to match the looks.[5]

After her coronation as Miss Russia, she started modelling for the world-famous designer Philipp Plein, and also participated in fashion shows by such designers as Olga Deffi, Alina Assi, Ilya Shiyan, Irina Natanova and Vyacheslav Zaitsev, one of the most well-known Russian fashion designers.[3]

While preparing for the Miss Universe 2010 competition, she stated that she doesn't have a boyfriend yet. "I haven’t got any time for boyfriends. My day begins with English classes and come to a end with fashion parade late in the evening. I rarely think about men now, but, of course, love is inside each of us."[6] She will be accompanied by her mother and grandmother to Las Vegas where the contest is held.[7] Her main dress at the competition was a $60,000 Empire style hand-made evening silk dress by Jacob Schaefer.[8] As the traditional gift required by each participant, she brought hand-painted Matryoshkas. Each of them had a picture of one of the 2005-2009 Miss Universe winners.[9]

Antonenko believes her best qualities are persistence, sincerity and friendliness, as well as drive and passion in the fight for victory.[10]

As for her future plans, she has said that she wishes to continue her studies and even plans to pursue post-graduate degree after graduating.[5]

February 13, 2011 took part in "Dancing with the Stars" which takes place on the broadcast channel "Russia-1". Partner Irina was Mikhail Mamaev ..

In the same year, Irina Antonenko debut as an actress in a movie. Her first job began shooting the film Timur Bekmambetov «The Darkest Hour», a thriller directed. Chris Gorak, producer Timur Bekmambetov, Tom Jacobson, in a cameo role. However, it is familiar with the famous film producer has become a turning point in the fate of Irina. The camera, acting, director's execution of tasks, work on the nature of the character - everything is so fascinated Antonenko, she firmly decided to link their fate with the theater and the cinema. Enrolled in the Russian University of Theatre Arts - GITIS, Irina made the first positive step towards a dream.

September 23, 2012, the debut of Irene as a theater actress. On the stage of the Moscow theater named. Meyerhold was a great success premiere of "The Mystery of magic rings" with her participation.

In 2014, Irina has played a major role in the TV series "The Ship". After the premiere of Irina became very popular.