Irina Mikitenko, née Volynskaya (Russian: Ирина Волынская (Микитенко); born 23 August 1972 in Bakanas, Kazakh SSR, Soviet Union), is a Kazakhstan-born German long-distance runner who competes in marathons. She won the Berlin Marathon in 2008 and is a two-time winner of the London Marathon. She has competed at the Summer Olympics on four occasions.

Mikitenko was a track specialist in the early part of her career, running in distances from 3000 metres to 10,000 metres. She represented Kazakhstan at the 1996 Atlanta Olympics in the 5000 metres but migrated to Germany soon after. Taking up German citizenship, she ran German records in the 3000 m (8:30.39 minutes) and 5000 m (14:42.03 minutes). She came close to a major 5000 m medal on several occasions: at the World Championships in Athletics she was fourth in 1999 and fifth in 2001, while at the 2000 Summer Olympics took fifth place. After a seventh-place finish in the event at the 2004 Summer Olympics she took a career break to have a child.

Upon her return to competition she began focusing on road running events. The change up to the marathon brought the greatest success of her career. A run of 2:19:19 hours to win the Berlin Marathon made her the fourth fastest woman ever at that point. Her win in London the year after in 2:22:11 hours was the fastest that year. With consistent marathon performances, she secured three consecutive World Marathon Majors title in both the 2007-08, 2008–09, and 2009–10 seasons. She entered her first Olympic marathon in 2012 and came fourteenth.

Mikitenko began participating in long-distance running at the age of 14. Under her maiden name of Volynskaya, she represented Kazakhstan in the 5,000 metres at the 1996 Olympic Games, but failed to make the finals. Since she has German ancestors, she and her husband immigrated in 1996 to the German state of Hesse.

A year later, Mikitenko became the German champion in cross-country running, defending her national title over 5,000 metres. She won twice consecutively at Luxembourg's prestigious Eurocross meeting in 1999 and 2000.[1] In August 2000, she broke the 17-year-old record of Brigitte Kraus in the 3,000 metres. She placed fifth in the 5,000 metres at the 2000 Olympic Games in Sydney, and finished in the same position at the 2001 World Athletics Championships in Edmonton.

In 2003, she won the Paderborner Osterlauf, a 10-km road-running race in Germany, finishing in a record time of 31:28 minutes. She also won the Bietigheimer Silvesterlauf race that year, and participated in the 5,000 metres at the 2004 Olympic Games. 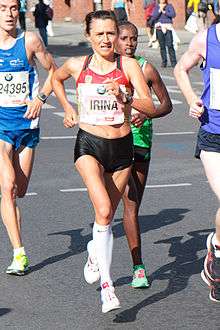 After having a baby, Mikitenko returned to competition in 2006, again becoming the German champion in the 5,000 and 10,000 metres. In the 2006 European Championships, she placed ninth, one place behind long-time rival Sabrina Mockenhaupt.

In 2007, she placed second behind Benita Johnson in the Berlin Half Marathon, achieving a personal-best time of 1:09:46 hours. In September 2007 she made her marathon debut at the Berlin Marathon, finishing second and qualifying for the 2008 Summer Olympics.

In April 2008, at only her second international marathon, she won the women's London Marathon in a time of 2:24:12. She withdrew from the 2008 Summer Olympics in Beijing due to hip problems causing pain whilst running on 1 August 2008. Healthy again, on 28 September, she improved her own German record at the Berlin Marathon almost by five minutes to 2:19:19, making her number four on the women's marathon all-time list.

On 2 November 2008, Mikitenko won the jackpot prize of 500,000 $US of the World Marathon Majors (WMM) for the best performer in New York, London, Chicago, Berlin and Boston within the last two years. After twelve competitions she was in a tie with Ethiopia's Gete Wami with 65 points each, but the organisation voted her the winner, awarding her the prize because she had competed in only three races, compared to Wami's four.

She repeated her performance at the London Marathon in 2009, finishing with a time of 2:22:11, one minute ahead of Britain's Mara Yamauchi.[2] Following the death of her father in July, Mikitenko struggled to find form in the buildup to the 2009 World Championships. Jurgen Mallow, director for the German athletics team, said her withdrawal was a blow for the team hosting the championships, stating that she "did not manage to hit World Championship form in the St. Moritz altitude training camp. We are very, very sad about this".[3] Finally she participated in the October 2009 Chicago Marathon, winning with an official time of 2:26:31 and won the half-million dollar WMM jackpot for a second consecutive year.

Mikitenko competing at her fourth Olympics in London in 2012

She had a seven-month lay-off after the Chicago run and decided not to run at the Paderborn 10K, which was her preparation for the 2010 London Marathon, due to sore shins.[4] She attempted to defend her London title but her shin problems persisted and she dropped out mid-race – a fate which also befell defending men's champion Samuel Wanjiru.[5] She signed up for the 2010 Chicago Marathon but, despite having the fastest time in qualifying, she faded in the second half of the race and ended up in fourth place. She claimed her third consecutive WMM jackpot.[6]

She claimed victory at the 2011 Parelloop 10K in April.[7] Running at the 2011 London Marathon, she could not keep pace with the race leaders and ended the race in seventh while Mary Keitany won the race with a time equal to Mikitenko's best.[8] Her season went well from there on, however: she won the Avon Frauenlauf and Berlin 10K races and was runner-up to Florence Kiplagat at the 2011 Berlin Marathon in a time of 2:22:18 hours.[9] She had two marathon outings in 2012. Her fastest was a run of 2:24:53 for seventh at the 2012 London Marathon, making her the fastest European in the race.[10] She returned to the city later that August to compete in the 2012 Olympic marathon, where she placed 14th overall.[11] Mikitenko turned forty later that month, marking her transition into the veterans age category.

In spite of her age she remained one of the best international runners and took third place at the 2013 Tokyo Marathon (a new addition to the World Marathon Majors circuit).[12]

Her father-in-law Leonid Mikitenko participated in the 1968 Summer Olympics in Mexico City, with a personal-best time of 13:36 minutes over 5000 metres.

Irina Mikitenko is 1.58 metres tall, weighs 49 kg, and is married to her trainer Alexander Mikitenko, with whom she has had two children. In 1999, she switched from TV Gelnhausen to LG Eintracht Frankfurt. Since 1 January 2006, she has competed for TV Wattenscheid 01.