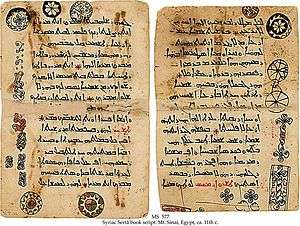 Irmologion (Greek: εἱρμολόγιον heirmologion) is a liturgical book of the Eastern Orthodox Church and those Eastern Catholic Churches which follow the Byzantine Rite. It contains irmoi for the various canons which are chanted during the morning service. The book Irmologion derives from εἱρμός heirmos meaning "link". The irmos is a melodic model which preceded the composition of the odes. Hence, λογεύω logeuō means "to collect", because within the irmologic repertoire there are more canons (or akrosticha) than irmoi.

An important portion of Matins and other services in the Orthodox Church is the canon, a long liturgical poem divided into nine odes.[1] Each ode is made according to a certain irmos, and it is followed by troparia.[2] Sometimes a certain longer irmoi are sung which are called katabasiai because of their descending melos.[3] The troparia sung with the canon are performed out of a textbook (Reader,[4] Menaion) according to avtomela, but the irmoi and katabasiae are chanted by the choir according to irmoi. Since the Irmologion was invented as a chant book provided with musical notation, it only contained the smaller number of heirmoi with those texts which identified them. The other canons and akrosticha were usually collected in a separated text book, and the incipit of a certain heirmos or, in case of troparia the avtomela, indicated the melody which had to be applied for the recitation of the hymns.

Since the Byzantine period, there already developed a soloistic kalophonic way to perform just one ode. The printed edition of the kalophonic irmologion (1835) is dominated by Ottoman era composers like Petros Bereketis, Chrysaphes the Younger, Germanos of New Patras, and Balasios, when this genre became very popular.[5]

Composition of the Irmologion and of the Orthros Anthology

Within the Irmologion, the new chant book of the Stoudites' reform, the irmoi are usually arranged according to the eight tones of Byzantine chant either according to the odes (order of the odes, OdO, divided into eight parts according to the echoi, but within each echos all odes are ordered beginning with all first odes of each canon, all second or third odes etc.) or according to the canon (canon order, KaO, divided into eight parts according to the echoi, but the odes within each echos are organised according the canon of each heirmos).[6] The calendaric canon order is more common in Old Church Slavonic manuscripts, although there are Oktoich books which do not only contain the hymns of the Irmologion (similar to the composition of the older tropologia which persisted until the 12th century).[7] The Byzantine repertoire of irmoi which was conservated by the first translations into Old Church Slavonic in Ohrid, has been reduced between the 12th and the 13th centuries.[8]

Today the Irmologion is often replaced by another chant book which is called "Anthology of the Orthros" (Ἀνθολογία τοῦ Ὄρθρου or Псалтикиина Утренна) which replaced the earlier Akolouthiai used since the 14th century.[9] Some of these Anthologies do also contain the odes of the canon, but also many other hymns of the Psalterion (especially the more elaborated compositions the Polyeleos psalms) and of the book Octoechos which are sung during the morning service (Orthros, Utrenna).

These additional hymns sung during Orthros are:

The oldest manuscripts which contained canons, were tropologia which are composed according to a calendaric order. There were also types like the Georgian Iadgari[10] and the Armenian Šaraknoc'. The book Irmologion was created later as a notated chant book by the reformers at the Stoudios Monastery, although not all Irmologia have musical notation.[11] Concerning the traditional repertoire of these books, a Studites edition can be distinguished from the one at Sinai.[12] The earliest notated Irmologion can be dated back to the 10th century in Byzantium. A full version of the Russian Irmologion, in Church Slavonic includes about 1050 irmoi.[13] Earlier examples provided only the written text; later, the "hooks" and "banners" of Znamenny Chant were added above the text. The first printed edition of a notated Irmologion in Russia,the Irmologiy notnago peniya, using neumes (square notes) on a staff, was published in 1772. Today, most Russian Irmologia are printed using modern musical notation (with the exception of some Old Believer communities, which continue to use the older znamenny neumes[14]), although elsewhere, Byzantine musical notation is nearly universally used.

Without notation (10th to 18th centuries)