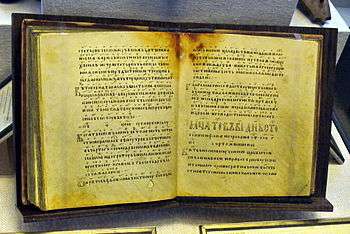 A Menaion in the Church Slavonic language, 12th century, Novgorod

The Menaion (Greek: Μηναῖον; Slavonic: Минеѧ, Minéya, "of the month") is the liturgical book used by the Eastern Orthodox Church[note 1] containing the propers for fixed dates of the calendar year, i.e. entities not dependent of the date of Easter.

The Menaion is the largest volume of the propers for the Byzantine Rite and is used at nearly all the daily services.

The complete Menaion is published in twelve volumes, one for each month; the first volume is for September which commences the Byzantine liturgical year.

The Festal Menaion is an abridged version containing texts for those great feasts falling on the fixed cycle, some editions also containing feasts of the major saints.

The General Menaion contains services for each type of celebration (apostles, martyrs, etc.) with blank spaces for the name of the saint(s) commemorated. Originating before the invention of printing when the enormous volume of the complete Menaion could not be copied for every church, this is still used for saints that do not have complete services, e.g., for the patron feast of a church named after a minor saint; it is also used by missions and parishes unable to afford a complete Menaion.

Supplementary volumes to the Menaion exist for local saints, e.g., one for all the Saints of the Kiev Caves Monastery, or for newly canonized saints or icons which have their own locally observed feasts. 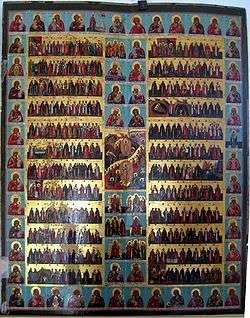 The term "Menaion" is also applied to icons of all the saints whose feast days fall within a particular month. A particular church may have 12 such icons, one for each month of the year, or it may have one large icon depicting all 12 months on one panel.

This article is issued from Wikipedia - version of the 9/20/2015. The text is available under the Creative Commons Attribution/Share Alike but additional terms may apply for the media files.