In the geometry of curves, an orthoptic is the set of points for which two tangents of a given curve meet at a right angle.

The orthoptic of a parabola is its directrix. 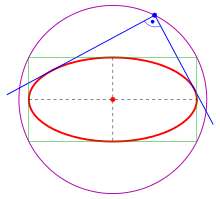 Ellipse and its orthoptic (purple) 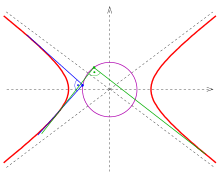 Hyperbola with its orthoptic (purple)

is the director circle

there are no orthogonal tangents, s. below),
4) an astroid

is a quadrifolium with the polar equation

Remark: In medicine there exists the term orthoptic, too.

Orthoptics (red circles) of a circle, ellipses and hyperbolas

Orthoptic of an ellipse and hyperbola

The ellipse with equation

can be represented by the unusual parametric representation[1]

is the slope of the tangent at a point of the ellipse.

describes the upper half and

the lower half of the ellipse. The points

are points of the desired orthoptic (circle

The tangent at point

If a tangent contains the point

, off the ellipse, then the equation

which has two solutions

. The free term of a reduced quadratic equation is always the product of its solutions. Hence, if the tangents meet at point

The last equation is equivalent to

The ellipse case can be adopted nearly literally to the hyperbola case. The only changes to be made are: 1) replace

Orthoptic of an astroid 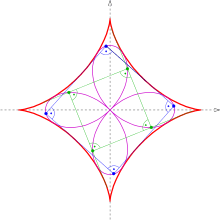 Orthoptic (purple) of an astroid

An astroid can be described by the parametric representation

one recognizes, at what distance

in parameter space an orthogonal tangent to

appears. It turns out, that the distance is independent of parameter

. The equations of the (orthogonal) tangents at the points

Their common point has coordinates:

This is at the same time a parametric representation of the orthoptic.

Herefrom we get the polar representation

of the orthoptic. Hence

Isoptic of a parabola, an ellipse and a hyperbola 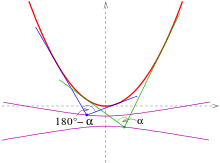 Isoptics (purple) of a parabola for angles 80 and 100 degree 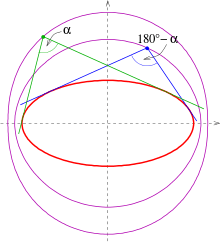 Isoptics (purple) of an ellipse for angles 80 and 100 degree

Isoptics (purple) of a hyperbola for angles 80 and 100 degree

Below isotopics for an angle

are listed. They are called

-isoptics. For the proofs: s. below.

-isoptics of the parabola with equation

are the arms of the hyperbola

-isoptics of the ellipse with equation

are the two parts of the curve of 4. degree

-isoptics of the hyperbola with the equation

are the two parts of the curve of 4. degree

can be parametrized by the slope of its tangents

The tangent with slope

is on the tangent, if

holds. That means, the slopes

of the two tangents containing

If the tangents meet with angle

has to be fulfilled. Solving the quadratic equation for

into the last equation, one gets

This is the equation of the hyperbola above. Its arms bear the two isoptics of the parabola for the two angles

In case of an ellipse

Now, as in case of a parabola, the quadratic equation has to be solved and the two solutions

to be inserted into the equation

. Rearranging shows that the isoptics are parts of the curve of 4. degree:

(as in the case of the orthoptics, s. above).