Itsukushima Shrine (Japanese: 厳島神社 Itsukushima-jinja) is a Shinto shrine on the island of Itsukushima (popularly known as Miyajima), best known for its "floating" torii gate.[1] It is in the city of Hatsukaichi in Hiroshima Prefecture in Japan. The shrine complex is listed as a UNESCO World Heritage Site, and the Japanese government has designated several buildings and possessions as National Treasures.

The shrine has been destroyed several times, but the first shrine buildings were probably erected in the 6th century. The present shrine dates from the mid-16th century, and is believed to follow an earlier design from the 12th century.[3][4] That design was established in 1168, when funds were provided by the warlord Taira no Kiyomori.

The shrine was "devoted to the worship of goddesses to whom Kiyomori owed thanks, he felt, for his success in life." Originally it was a pure Shinto shrine "where no births or deaths were allowed to cause pollution. Its treasures include the celebrated Heike Nōkyō, or 'Sutras dedicated by the Taira House of Taira'. These consist of thirty-two scrolls, on which the Lotus and other sutras have been copied by Kiyomori, his sons, and other members of the family, each completing the writing of one scroll. Kiyomori lavished great wealth upon Itsukushima, and he liked to show the place to his friends and colleagues, or even to royal personages..."[5]

The Itsukushima Shrine at high tide, when it appears to float on the water

The shrine was designed and built on pier-like structures over the bay so that it would appear to be floating on the water, separate from the sacred island, which could be approached by the devout.

Near the main shrine is a noh stage which dates from 1590.[1] Noh theater performances have long been used to pay homage to the gods through the ritual acting out of key events in Shinto myth.

The dramatic gate, or torii, of Itsukushima Shrine is one of Japan's most popular tourist attractions, and the most recognizable and celebrated feature of the Itsukushima shrine,[6] and the view of the gate in front of the island's Mount Misen is classified as one of the Three Views of Japan (along with the sand bar Amanohashidate, and Matsushima Bay). Although a gate has been in place since 1168, the current gate dates back only to 1875.[1] The gate, built of decay-resistant camphor wood, is about 16 metres high. The placement of an additional leg in front of and behind each main pillar identifies the torii as reflecting the style of Ryōbu Shintō (dual Shinto), a medieval school of esoteric Japanese Buddhism associated with the Shingon Sect.

The torii appears to be floating only at high tide. When the tide is low, it is approachable by foot from the island. Gathering shellfish near the gate is also popular at low tide. At night, powerful lights on the shore illuminate the torii. 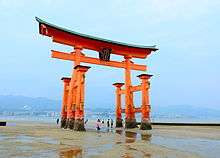 The torii gate, accessible from the island during low tide

On September 5, 2004, the shrine was severely damaged by Typhoon Songda. The boardwalks and roof were partially destroyed, and the shrine was temporarily closed for repairs.

The shrine is dedicated to the three daughters of Susano-o no Mikoto, Shinto god of seas and storms, and brother of the sun goddess Amaterasu (tutelary deity of the Imperial Household). Because the island itself has been considered sacred, commoners were not allowed to set foot on it throughout much of its history to maintain its purity. To allow pilgrims to approach, the shrine was built like a pier over the water, so that it appeared to float, separate from the land.[7] The red entrance gate, or torii, was built over the water for much the same reason. Commoners had to steer their boats through the torii before approaching the shrine.

Retaining the purity of the shrine is so important that since 1878, no deaths or births have been permitted near it.[8] To this day, pregnant women are supposed to retreat to the mainland as the day of delivery approaches, as are the terminally ill or the very elderly whose passing has become imminent. Burials on the island are forbidden.

View from the torii