Hiroshima Prefecture (広島県, Hiroshima-ken) is a prefecture of Japan located in the Chūgoku region on Honshu island.[1] The capital is the city of Hiroshima.[2] It has a population of around 2.8 million.

The area around Hiroshima was formerly divided into Bingo Province and Aki Province.[3] This location has been a center of trade and culture since the beginning of Japan's recorded history. Hiroshima is a traditional center of the Chūgoku region and was the seat of the Mōri clan until the Battle of Sekigahara.

Hiroshima prefecture lies in the middle of Chūgoku. Most of the prefecture consists of mountains leading towards Shimane Prefecture; and rivers produce rich plains near the coast.

The province faces Shikoku across the Seto Inland Sea. Hiroshima Bay opens on the Inland Sea.[4] The prefecture also includes many small islands.

As of 1 April 2014, 4% of the total land area of the prefecture was designated as Natural Parks (the lowest percentage of any prefecture), namely Setonaikai National Park; Hiba-Dōgo-Taishaku and Nishi-Chūgoku Sanchi Quasi-National Parks; and six Prefectural Natural Parks.[5] 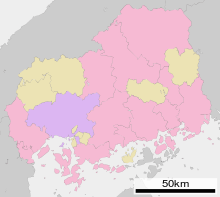 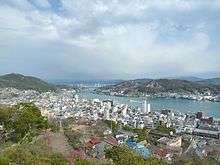 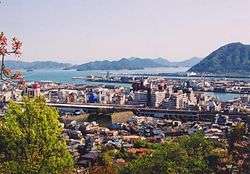 Hiroshima's main industries include automobiles (Mazda is headquartered there) and shipbuilding (Kure was one of the main naval bases of the Imperial Japanese Navy and remains a major commercial yard).

The sports teams listed below are based in Hiroshima.