This article is about the region in Japan. For the town in Japan's Aomori Prefecture, see Tōhoku, Aomori.

Tōhoku retains a reputation as a remote, scenic region with a harsh climate. In the 20th century, tourism became a major industry in the Tōhoku region.

The area was historically known as the Michinoku region.[3] a term first recorded in Hitachi-no-kuni Fudoki (常陸国風土記) (654). There is some variation in modern usage of the term "Michinoku".[4]

Tōhoku's initial historical settlement occurred between the seventh and ninth centuries, well after Japanese civilization and culture had become firmly established in central and southwestern Japan. The last stronghold of the indigenous Emishi on Honshu and the site of many battles, the region has maintained a degree of autonomy from Kyoto at various times throughout history. 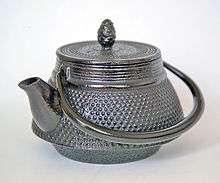 Cast iron teapots like this one sit atop stoves during the long winters in Tōhoku.

The haiku poet Matsuo Bashō wrote Oku no Hosomichi (The Narrow Road to the Deep North) during his travels through Tōhoku.

The region is traditionally known as a less developed area of Japan.[5]

The catastrophic 9.0-Magnitude earthquake and tsunami on March 11, 2011 inflicted massive damage along the east coast of this region, killed 15,894[6] people and was the costliest natural disaster ever which left 500,000 people homeless along with radioactive fallout from the Fukushima Daiichi nuclear disaster.

The population collapse of Tōhoku, which began before the year 2000, has accelerated, now including previously dynamic Miyagi. Despite this, Sendai City has grown due to the disaster. The population collapse of Aomori, Iwate and Akita Prefectures, Honshu's 3 northernmost, began in the early 1980s after an initial loss of population in the late 1950s. Fukushima Prefecture, prior to 1980, had traditionally been the most populated, but today Miyagi is the most populated and urban by far.

Tōhoku, like most of Japan, is hilly or mountainous, with the Ōu Mountains running north-south. The inland location of many of the region's lowlands has led to a concentration of much of the population there. Coupled with coastlines that do not favor seaport development, this settlement pattern resulted in a much greater than usual dependence on land and rail transportation. Low points in the central mountain range fortunately make communications between lowlands on either side of the range moderately easy.

Tōhoku was traditionally considered the granary of Japan because it supplied Sendai and the Tokyo-Yokohama market with rice and other farming commodities. Tōhoku provided 20 percent of the nation's rice crop. The climate, however, is harsher than in other parts of Honshū due to the stronger effect of the Siberian High, and permits only one crop a year on paddy fields.