For other uses of "Ivanovo", see Ivanovo (disambiguation).
For other places with the same name, including in Ivanovo Oblast, see Ivanovo, Russia.

The Uvod River, a tributary of the Klyazma, flows from north to south, dividing the city in to two halves. There are also two rivers in Ivanovo: the Talka and the Kharinka.

The city is first mentioned in 1561, when it was given to the Cherkassky princely family by Ivan IV, after the latter's marriage to Maria Cherkasskaya. However, the relevant document has since been lost.

The modern city was created by merging the old flax-processing village Ivanovo with the industrial Voznesensky Posad in 1871. Yakov Garelin—a patron of arts, historian, manufacturer, and public figure—is considered to be the founder of the city and its second head. Under his government, the city began to develop, industrialise, and grow.

Until 1932, the official name of the city was Ivanovo-Voznesensk. Because of its textile manufacturing industry, Ivanovo earned the sobriquet of the "Russian Manchester" during the 19th century.[13]

By the early 20th century, Ivanovo was competing with Łódź (also a part of the Russian Empire at that time) for the title of the primary textile production center of Europe. As the workers' living conditions were appalling, the strikes were frequent. One of these strikes (May 14-July 22, 1905) led to the first Russian revolution. According to the Soviet historiography,[14] the Ivanovo Soviet (created on May 28, 1905) was one of the first soviets in history. However, this statement is contested.

In 1937 the city opened the Interdom - a school for children of foreign Communists, including high learning.

In Ivanov the legendary air squadron (then - known as a Regiment) "Normandie-Niemen" began operations. By agreement between the Soviet government and the "Free French" government-in-exile in late 1942, a group of French pilots was sent to the Soviet Union. Construction of a new airport began on the northern outskirts of the city. The pilots were provided with decent housing, and 14 Yak-1 fighter aircraft. During 1943, the French fought alongside the Soviet Air Forces.

After the war, along with the continued textile industry in Ivanovo engineering and other industries developed.[15] In the 1960s, the city became the center of the Upper-Economic Council. The 1980s saw the accelerated pace of housing construction.

Since the beginning of the 21st century there has been declining production in Ivanovo. In the first decade of the century, a large number of enterprises were closed. The weaving factories BIM, BAT melange Plant and other smaller companies in the textile industry ceased to exist.

Ivanovo has traditionally been called the textile capital of Russia. Since most textile workers are women, it has also been known as the "city of brides". Probably the most famous of the city's female natives was the postmodern French writer Nathalie Sarraute.

Public transport is represented by trolleybuses, buses and taxis. The trolleybus system was opened on November 5, 1962. The first line ran from the Bagayeva area (now Victory Square) to the GZIP plant. The tram was operated from November 6, 1934 until June 1, 2008. According to Ivanov, the former Mayor Alexander Fomin: "Over the past 20 years, the number of vehicles in the city has increased by more than 10 times, while traffic is 5–7 times higher than that for which they were designed.

The system of urban bus services in Ivanovo-Voznesensk began on November 8, 1926. The bus park was originally located on the street Paris Commune. In the early 1960s, a new bus depot was built on Prospekt Tekstilchshiki. In the Soviet period, the operation of buses and coaches exercised Ivanovskoye passenger motor company (MTE) #1, and taxi station (Ivanovo MTE-2). Ivanovo MTE-1 closed in December 2007.

It is home to Ivanovo Severny, which is one of the largest military airlift bases in Russia. Civilian air services are provided at the Ivanovo Yuzhny Airport. Since 1896, there is a railway connection between Ivanovo and Moscow.[16] 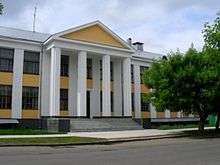 There are several objects of cultural heritage in Ivanovo. The center of the city boasts buildings of the period of constructionism built there in the 1920s – early 1930s. For historical reasons, Ivanovo-Voznesensk became the site of unique construction experiments carried out by both architects from Moscow and St. Petersburg, and local architects.[17] Among them are the buildings, like the Ship-house (1930), architect D. F. Fridman; the Horseshoe-house (1934), architect A. I. Panov; the Regional Bank building (1927), architect V. A. Vesnin; the Palace of Arts (1939), architect A. V. Vlasov; the Collective-house (1931), architect I. A. Golosov; the Ivanovo railway station (1934); Oblsovnarhoz-houses (1935), N. I. Kadnikov; and others.[18] 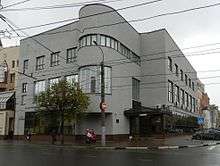 Many monuments are devoted to the revolutionary past of the city, such as the "Red Talka" memorial or numerous monuments to revolutionaries. The historical center of the city is notable mainly for the former houses of famous Ivanovites: the mansion houses of E. I. Gratchev (1774), I. N. Polushin (1904; here the Soviet government was first declared), K. D. Burkov, the Kuvayevs, the Gandurins, the Burlinis, etc. The industrial architecture, like the remaining textile manufactures of the 19th century, is also of interest.

Other notable sights include Schudrovskaya Palatka (17th century), the first brick civil building in Ivanovo, the Svyato-Vvedensky Monastery (architect P. Begen), the wooden Uspenskaya church (17th century), the mansion of A. Duringer (1910), and others.

According to historians, the youth policy in the city started in 1892, when the first Marxist society was formed. In 1919 the city Komsomol (Young Communist League) organization was established, soon this movement spread all over the region. By the beginning of the Great Patriotic War in 1941, Ivanovo regional Komsomol organization had already had over 100 thousand people. After the war the main objectives of the movements were to bring up and educate the working youth and to organize various activities. In 1970-1980s different circles and amateur theatres were functioning, and people’s universities were established.

In the 1980s, Ivanovo Oblast became one of the largest student centers of European Russia (7 institutes of higher education and 26 colleges with about 35 thousand students).

In the 1990s, the youth policy in Ivanovo was challenged, but remained and developed, due to the activity of initiative ivanovites. In 1992 the Department of youth affairs was established. The new youth policy was being formed. New legislature and programs were launched to encourage young families, youth employment, patriotic education and support. 53 clubs of young families and 28 military-patriotic organizations were formed. Since the beginning of the 2000s the complex youth and children’s policy has been pursued, through the legislative (like the regional law “Of the state support of youth and children’s social organizations) and grant support means.

Nowadays the Department of internal affairs of the Ivanovo region is responsible for the development of the youth policy of the region.

There are almost 98 thousand young people in Ivanovo, i.e. each fourth citizen. It is one of the Russian students' centers, with 8 public and 5 private institutes of higher education, offering educational facilities both for Russian and foreign students. The city is the third largest one in the country after Moscow and the Moscow region, in terms of number of students per 10 000 citizens.

There are 18 military-patriotic clubs with about 550 young participants, 170 people are in charge of local history activities. More than 20 per cent of young citizens take part in the youth organizations’ activities, like “IMCA – Ivanovo”, Russian Youth Union, the “Novy Rubezh”, Ivanovo city pupils’ Duma, the “Shkolny Activ Goroda” (City school activists) and many others.

Annually the city holds the “Students’ spring” festival of students’ creativity. It’s the most popular event in cultural life of Ivanovo students, with the participation of all universities and institutes. Since 1997 the interregional festival of students “Maslenitsa” (“Pancake week”) is held. Yearly about 20 students’ teams from 6-8 regions take part in it.

Being concerned of the youth creativeness, the city government supports the development of facilities of students’ cultural, sporting and entertainment centers, as well as organizes regional sports competitions among students.

In order to encourage young scientists, each year the best students are given the grant of the governor, which is a good support for gifted researches. To increase the academic level of the youth, the contest of students’ and postgraduates’ researches was established. The papers should be devoted to the resolution of topical problems of the region. The best authors are given the award named after M. V. Frunze.

Ivanovo is a multinational city, more than 100 nationalities’ representatives live here. There are 16 ethnic and cultural autonomies, associations and centers.

Much attention is paid to the youth parliamentarism, which is developing within such structures, as the Youth Civic Council of the City Administration and Ivanovo city pupils’ Duma. The deputies of the latter participate in real elections campaigns in their schools, represents the schoolchildren’s interests to the municipal government, contribute to the development of youth initiatives, arrange socially topical activities, like the charity marathon “Ty nam nuzhen” (“We need you”) aimed at supporting children with disabilities. There are several opportunities for the talented youth as well, e.g. awards and grants from the Head of the city.

In 2012 schoolchildren of Ivanovo supported the city’s bid to the contest “The European Youth Capital 2015” and organized a flash mob and made large patchwork cloth. As a candidate city, Ivanovo is realizing a comprehensive program for the youth development, having invited professionals of the international level. One of the contest’s objective being to strengthen interaction between local communities and the European structures, Ivanovo is increasing cooperation with international partners and investors, in order to develop its infrastructure. The status of the European Youth Capital will give Ivanovo a chance to become a role model for Russian and European cities, ready for empowering the youth and renovating their local communities. Ivanovo is a youth and student center with great intellectual potential, where new ambitious ideas and projects are born and develop. Ivanovo of the future is a city which no one wants to leave, quite on the contrary. So far the municipal and regional administration with the young activists has decided to bid for the title of the European Youth capital 2015. The initiative has been welcomed by Prime-minister and President of Russia.

On July 4, 2012, the European Youth Forum has published a list of finalists for the title "European Capital of Youth 2015." The city of Ivanovo was one of the finalists of the city.

Ivanovo is twinned with: