Jönköping (Swedish pronunciation: [²jœnːɕøːpɪŋ]) is a city in southern Sweden with 89,396 inhabitants (2010).[2] Jönköping is situated at the southern end of Sweden's second largest lake, Vättern, in the province of Småland. The original city of Jönköping has grown together with the twin city of Huskvarna (population 23,033) and the suburb of Norrahammar-Hovslätt (population 9,070) to form a contiguous urban area, with 93,662 inhabitants in 2013. 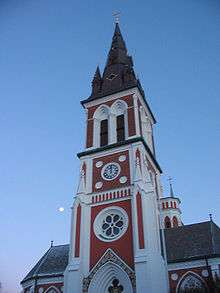 Jönköping is an old trading centre (Köping) situated at a natural crossroads for routes following the rivers Nissan and Lagan, and the road connecting the provinces of Östergötland and Västergötland, a result of the town's geographical position at the southern end of lake Vättern, which divides the two provinces.

On 18 May 1284 Jönköping became the first City in Sweden to be granted its rights by king Magnus Ladulås, who ruled mostly from Vättern's largest island Visingsö. The first part of the city's name, "Jön", is derived from a creek, "Junebäcken", in Talavid, in what is now the western part of the city. This was the location of the first known settlement in the area. The second part of the name "köping", is, as mentioned above, an old word for a trading centre or market place.

The geographical position of the city also left it vulnerable to attack via the river routes that led south, mainly from Danes. At that time the provinces of what is today southern Sweden — Scania, Halland and Blekinge — belonged to Denmark. The city was plundered and burned several times until it was fortified during the 16th and 17th centuries.

Jönköping was known for its matchstick industry between 1845-1970.[4] Today it is an important Nordic logistical center, with many companies' central warehouses (such as Elkjøp, IKEA, Electrolux and Husqvarna) situated there.

The urban area of Jönköping today includes the eastern industrial town of Huskvarna, with which it has grown together.

Elmia, a major trade fair and exhibition centre, is situated in Jönköping. Elmia Wood is the world’s largest forestry fair, and those for subcontractors, trucks, caravans and railways are the biggest of their kind in Europe. Since 2001, Elmia has been the site of the world's largest LAN party, DreamHack, with two events every year, Dreamhack Summer and Dreamhack Winter.

Jönköping's climate was humid continental (Köppen Dfb) bordering on subarctic with long, cold winters and short, warm summers during the 1961-1990 period. However, the window between subarctic and oceanic is very small in this marine-influenced climate type, and in recent years the climate has more resembled very cold oceanic. However, figures are slightly skewed due to the weather station being located at the airport which is at an elevation of 228 metres (748 ft), whereas the city centre is at 100 metres (330 ft). This likely renders up to between half a degree to a full degree milder temperatures in the urban centre.

w:sv:Wikipedia:KML/Jönköping
KML is from Wikidata
This article is issued from Wikipedia - version of the 9/30/2016. The text is available under the Creative Commons Attribution/Share Alike but additional terms may apply for the media files.