Kolding (Danish pronunciation: [ˈkʰʌleŋ]) is a Danish seaport located at the head of Kolding Fjord in the Region of Southern Denmark. It is the seat of Kolding Municipality. It is a transportation, commercial, and manufacturing centre, and has numerous industrial companies, principally geared towards shipbuilding. The manufacturing of machinery and textiles and livestock export are other economically significant activities.

The municipality is also a part of the East Jutland metropolitan area with 1.2 million inhabitants.[3]

In the Battle of Kolding, fought on 25 December 1658, the allied Polish and Danish forces under hetman Stefan Czarniecki defeated the Swedish forces of Charles X Gustav of Sweden.

A battle between German and Danish forces took place near the town on 23 April 1849 during the First War of Schleswig.

On 3 November 2004, the N. P. Johnsen's Fireworks Factory in the suburb of Seest exploded. One firefighter died, 85 people were injured, and around 2000 people were evacuated and some of them lost their home during this disaster in this suburb of Kolding.

Located in Kolding is the former royal castle of Koldinghus. This was built in the 13th century by King Eric Klipping and is now a museum with certain parts of the castle, including its chapel and hall, being used for governmental ceremonial events. It was the last royal residence in Jutland. Another notable site is the 13th century stone Church of Saint Nicholas (Danish: Sankt Nicolai), which is one of the oldest in Denmark. Popular tourist attractions include the Trapholt art museum and the gardens Geografisk Have. Trapholt holds collections of Danish arts from 1900 onwards and a smaller number of non-Danish exhibits. Kolding is also the site of Designskolen Kolding, a university design school.

The municipal museum, the Museet på Koldinghus, is located in the castle and former royal palace. It has a collection of Danish art from the late Middle Ages to the 1940s, miscellaneous artefacts of local interest, and an extensive collection of items in gold and silver.

The Trapholt art museum features many pieces from mainly Danish artists, along with a large collection of chairs.

Also Kolding houses the Danish Museum of Nurses (Danish: Dansk Sygeplejemuseum) which is situated in the former reception building of the former tuberculosis sanatorium for children. The exhibition also include this past of the buildings. The main part of the sanatorium is now a hotel, situated in a minor forest and overlooking the water. The building itself is very beautiful and built to resemble a palace. 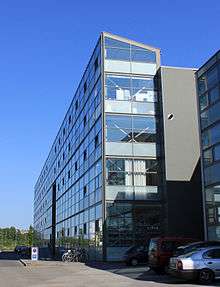 A branch campus of University of Southern Denmark (Danish: Syddansk Universitet) is located in the former hospital which was closed in 1975. Due to lack of space at this location, a new University is being built in downtown Kolding and due to open in August 2014. The city is also home to Design School Kolding (Designskolen Kolding), established in 1967 and teaching undergraduate and postgraduate degrees in the areas of fashion, graphic design and textiles.[4]

The new building of University of Southern Denmark will be built further to the east at Grønborggrunden in central Kolding.[5]

Kolding is twinned with the following towns.[6]