Born in Cornwall, Ontario, British Canada, Gallinger moved to the U.S. at an early age and first worked as a printer. He studied medicine at the Cincinnati Eclectic Medical Institute, from which he graduated in May 1858. He studied abroad for two years, and then returned to the United States and engaged in the practice of homeopathic medicine and surgery in Concord, New Hampshire. He was an active member of the American Institute of Homeopathy (AIH) from 1868–80, and throughout his political career, he was a forthright advocate of the homeopathic school of thought and practice. Besides the AIH, he was a member of many state and national medical societies, and a frequent contributor to the journals of his profession. He was on the board of trustees of Columbia Hospital for Women, and a member of the board of visitors to Providence Hospital.

He was elected to the New Hampshire House of Representatives and served from 1872 to 1873. He served as a member of the state constitutional convention in 1876. He was then elected to the New Hampshire Senate and served from 1878 to 1880. He became surgeon general of New Hampshire, with the rank of brigadier general, from 1879 to 1880. He was then elected as a Republican to the United States House of Representatives, serving from March 4, 1885 to March 3, 1889, but declined to be a candidate for reelection in 1888.

After a brief stint returning to the New Hampshire House, Gallinger was elected to the United States Senate in 1891. He was reelected by the legislature without opposition in 1897, 1903 and 1909, and by popular vote in 1914, and served from March 4, 1891 until his death in Franklin, New Hampshire in 1918. He was chairman of the delegations from his state to the Republican National Convention of 1888, 1900, 1904 and 1908, and for a time was a member of the Republican National Committee.

He was President pro tempore during the Sixty-second Congress, and was also Republican Conference chairman. His additional achievements included chairman of the Committee on Transportation Routes to the Seaboard, Committee on Pensions, Committee on the District of Columbia, and chairman of the Merchant Marine Commission.[1] He also was named a member of the National Forest Reservation Commission, established by the Weeks Act, the Senate version of which Gallinger had sponsored.[2]

Gallinger received the honorary degree of A.M. from Dartmouth College in 1885, and served as trustee of George Washington University for several years. He was interred at Blossom Hill Cemetery, Concord.

(The subsequent text concerning Gallinger's life up until 1903 is derived from State Builders, see note below) 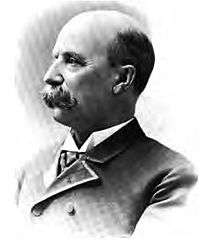 United States Senator Jacob H. Gallinger has been for more than thirty years a conspicuous figure in the public life of his state. He was born March 28, 1837, at Cornwall, Ontario, descended on the paternal side from Dutch ancestry, and his mother being of American stock. At an early age with only the limited advantages of schooling possible to be had at his home, he was thrown upon his own resources and early displayed that unflagging industry which has been the chief instrument of his rise to favor in professional and public life.[3]

As a youth he learned the printing trade and for a time published a newspaper. The printing-office was to him at once a source of livelihood and a school, and there he laid the foundations for that wide knowledge of men and affairs which has since been so marvelously extended in the course of his remarkable career as a public man.[3]

While still at work at the case he began the study of medicine, and in 1855 he entered a medical school at Cincinnati, Ohio, whence he was graduated at the head of his class in 1858. Feeling, however, that he was not yet qualified for the active work of his profession, he devoted himself for the next three years to study and travel, finding means to defray his expenses by literary work and incidentally working at the printer's trade, and in 1861 he entered upon practice in the city of Keene, where he remained only a few months, removing to Concord in April 1862, where for twenty-three years he was actively engaged in the practice of medicine and established a large and especially remunerative business.[3]

His aptitude for public affairs became early apparent, and in 1872 he held his first public office as member of the New Hampshire legislature. He was re-elected in 1873, and in 1876 was chosen a member of the constitutional convention. In 1878 he was elected a member of the state senate and was chosen for a second term, serving in 1879 as president of that body. During the administration of Governor Natt Head he served upon the Chief Magistrate's staff as Surgeon-General. In 1882 he was chosen chairman of the Republican State Committee and served in that capacity until 1890, when he resigned.[3]

In 1884 he was elected to the Forty-ninth Congress, was re-elected in 1886 by an enlarged majority, and declined a third nomination in 1888. In 1888 he was chairman of the New Hampshire delegation to the Republican National Convention at Chicago, where his political sagacity was well illustrated by the fact that he was one of the seconders of the nomination of the successful candidate, General Benjamin Harrison of Indiana. In 1890 he was again elected to the legislature, and during that session of the General Court was chosen United States Senator, entering upon his duties March 4, 1891. He was re-elected after a unanimous nomination in the Republican caucus in 1897, and in 1903 he received the unprecedented honor of a third consecutive election for a full term, receiving every vote that was cast in the caucus.[3]

In the senate he ranks with the leaders of his party. He is at the head of large and important committees, and is an indefatigable worker in legislative lines. A master of parliamentary law he is frequently called upon to preside, and his voice is potent, both in speech upon the floor of the Senate and in private conference in the shaping of the great policies of his party and the nation.[3]

Senator Gallinger is a public speaker of wide repute and his services are in constant demand in many states in every campaign. The larger portion of his political activity in this line, however, he devotes to his own state, where no advocate of party policies is more eagerly heard or more enthusiastically welcomed. In 1898 Senator Gallinger was again called to the chairmanship of the Republican state committee, and was re-elected to that position in 1900 and in 1902. In 1900 he again headed his state's delegation at the Republican National Convention, and in 1901 he was made the New Hampshire member of the Republican National Committee.[3]

This article incorporates text from the 1903 State Builders; An Illustrated Historical and Biographical Record of the State of New Hampshire at the Beginning of the Twentieth Century by George Franklyn Willey, a book now in the public domain. Please feel free to update the text but please maintain the proper citations on the information from that source.