Stirling was born in Glasgow. His year of birth is widely quoted as 1926[1] but his longstanding friend Colin St John Wilson later stated it was 1924.[2] Stirling went to school at Quarry Bank High School, Liverpool, England.[1] During World War II, he joined the Black Watch before transferring to the Parachute Regiment. He was parachuted behind German enemy lines before D-Day and wounded twice, before returning to Britain.[3]

Stirling studied architecture from 1945 until 1950 at the University of Liverpool, where Colin Rowe was a tutor.

Detail of workshops at University of Leicester Engineering Building (1959–63).

In 1956 he and James Gowan left their positions as assistants with the firm of Lyons, Israel, and Ellis to set up a practice as Stirling and Gowan. Their first built project – the Langham House Close (1955–58) – was regarded as a landmark in the development of 'brutalist' residential architecture, although this was a description both architects rejected.[4] Another result of Stirling & Gowan's collaboration is the Department of Engineering at the University of Leicester (1959–63), noted for its technological and geometric character, marked by the use of three-dimensional drawings based on axonometric projection seen either from above (in a bird's eye view) or below (in a worm's eye view). The project brought Stirling to a global audience.[4] 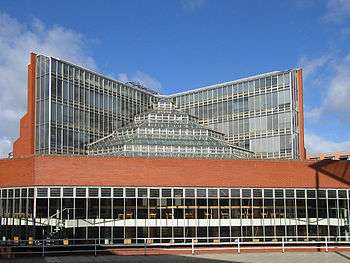 In 1963, Stirling and Gowan separated; Stirling then set up on his own, taking with him the office assistant Michael Wilford (who later became a partner). Stirling then oversaw two prestigious projects: the History Faculty Library at the University of Cambridge and the Florey Building accommodation block for The Queen's College, Oxford. He also completed a training centre for Olivetti in Haslemere, Surrey and housing for the University of St Andrews both of which made prominent use of pre-fabricated elements, GRP for Olivetti and pre-cast concrete panels at St Andrews.

During the 1970s, Stirling's architectural language began to change as the scale of his projects moved from small (and not very profitable) to very large. His architecture became more overtly neoclassical, though it remained deeply imbued with modernism. This produced a wave of large-scale urban projects, most notably three museum projects for Düsseldorf, Cologne, and Stuttgart. Winning the design competition for the Neue Staatsgalerie, it came to be seen as an example of postmodernism, a label which stuck but which he himself rejected.

As part of the world-wide expansion of Stirling and Wilford's practice beginning in the 1970s, the firm completed four significant buildings in the U.S., all university structures: an addition for the Rice University School of Architecture in Houston, Texas; the Arthur M. Sackler Museum at Harvard University in Cambridge, Massachusetts; the Schwartz Center for the Performing Arts at Cornell University in Ithaca, New York; and the Biological Sciences Library at the University of California, Irvine. Among unrealized projects in the US are designs for Columbia University and a competition proposal for the Walt Disney Concert Hall in Los Angeles.

In 1981, Stirling was awarded the Pritzker Prize.[5] Stirling received a series of important commissions in England – the Clore Gallery for the Turner Collection at the Tate Britain, London (1980–87); the Tate Liverpool (1984, but since then heavily altered and no longer recognisable as a Stirling project), and No 1 Poultry in London (1986, completed posthumously.

In June 1992, Stirling was awarded a knighthood. After consulting with Michael Wilford, he accepted the award on the grounds that it might help their practice.[6]

Three days after the announcement of his knighthood, Stirling was hospitalised in London with a painful hernia. He died on 25 June 1992 on the operating table due to bungled anaesthesis.[3] In accordance with his wishes, his ashes were buried near to his memorial at Christ Church Spitalfields. After Stirling's death, Michael Wilford (who had become a partner in 1971) continued the practice.

The Stirling Prize, a British annual prize for architecture since 1996, was named after him.

Many architects admire Stirling's work, but opinion has been divided.[7] After Stirling's death Italian architect and critic Vittorio Gregotti wrote that "from now on, everything will be more difficult". Writing in the Guardian, Andrew Saint called Stirling "A fearless experimentalist, a memorable innovator in form and a pungent character," but declared that, "he lacked the inner maturity, the breadth of reflection and the depth of discipline required for the highest level of architectural achievement."[7] Rather more cuttingly, Jonathan Meades says that "His buildings, like their bombastic maker, looked tough but were perpetual invalids, basket cases."[8] 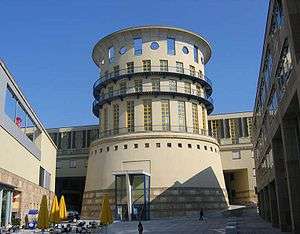