Hans Hollein (30 March 1934 – 24 April 2014) was an Austrian architect and designer[1] and key figure of postmodern architecture.[2] Some of his most notable works are the Haas House and the Albertina extension in the inner city of Vienna.[3]

Hollein was born in Vienna, and graduated in 1956 from the Academy of Fine Arts Vienna,[4] where he studied in the master class of Clemens Holzmeister.[5] During 1959 he attended the Illinois Institute of Technology and then in 1960, the University of California, Berkeley, where he completed his Master of Architecture degree.[6] During these years he met Mies van der Rohe, Frank Lloyd Wright and Richard Neutra.[6] Afterwards, he worked for various architectural firms in Sweden and the United States before returning to Vienna, founding his own office in 1964.[1]

Hollein's early works were small scale designs, such as the Retti candle shop in Vienna, which notably featured a facade constructed of anodized aluminum. [7]

In 1972, Hollein designed a series of glasses for the American Optical Corps.[8]

Hollein worked mainly as an architect but also established himself as a designer through his work for the Memphis Group[5] and the Alessi Company. Additionally, he staged various exhibitions, including for the Venice Biennale.[4] In 1980 he designed the stage for a production of Arthur Schnitzler's drama Komödie der Verführung (Comedy of Seduction) at Vienna's Burgtheater.[4] In 1985 Hollein was awarded the Pritzker Prize.[1]

Hollein achieved international fame with his winning competition designs for the Abteiberg Museum in Mönchengladbach (1972–82) and an underground Guggenheim Museum branch in Salzburg (1989). The later hasn't been built, but his ideas for an underground museum still materialised in the Vulcania European Centre of Vulcanology in Auvergne in France (1997–2002).[1]

Starting from the late 1990s, Hollein designed large-scale projects, including bank headquarters in Lichtenstein, Spain and Peru.[1] Starting from 2010 he worked with Ulf Kotz and Christoph Monschein at the Hans Hollein & Partner ZT GmbH.[9]

His son Max Hollein is the Director of the Städel Museum, the Liebieghaus and the Schirn Kunsthalle in Frankfurt am Main, Germany. 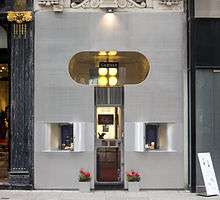