Herzog & de Meuron Basel Ltd.,[1] or Herzog & de Meuron Architekten, BSA/SIA/ETH (HdM), is a Swiss architecture firm with its head office in Basel, Switzerland.[1] The careers of founders and senior partners Jacques Herzog (born 19 April 1950) and Pierre de Meuron (born 8 May 1950) closely paralleled one another, with both attending the Swiss Federal Institute of Technology (ETH) in Zurich. They are perhaps best known for their conversion of the giant Bankside Power Station in London to the new home of Tate Modern. Jacques Herzog and Pierre de Meuron have been visiting professors at the Harvard University Graduate School of Design since 1994 and professors at ETH Zürich since 1999.

Herzog & de Meuron was founded in Basel in 1978. In 2001, Herzog & de Meuron were awarded the Pritzker Prize, the highest of honours in architecture. Jury chairman J. Carter Brown commented, "One is hard put to think of any architects in history that have addressed the integument of architecture with greater imagination and virtuosity." This was in reference to HdM's innovative use of exterior materials and treatments, such as silkscreened glass. Architecture critic and Pritzker juror Ada Louise Huxtable summarized HdM's approach concisely: "They refine the traditions of modernism to elemental simplicity, while transforming materials and surfaces through the exploration of new treatments and techniques."[2] In 2006, the New York Times Magazine called them "one of the most admired architecture firms in the world."[3]

HdM's early works were reductivist pieces of modernity that registered on the same level as the minimalist art of Donald Judd. However, their recent work at Prada Tokyo, the Barcelona Forum Building and the Beijing National Stadium for the 2008 Olympic Games, suggest a changing attitude.[3] The shapes and forms of some of the works suggest art glass and objects d'art that one would see on a coffee table, like an art deco ashtray or quirky container for chocolates - a building becomes a blown-up version of desk art because the computer can do it, mimic the plasticity of the medium, and make it possible as a feat of engineering.

HdM's commitment of articulation through materiality is a common thread through all their projects. Their formal gestures have generally progressed from the purist simplicity of rectangular forms to more complex and dynamic geometries. The architects often cite Joseph Beuys as an enduring artistic inspiration and collaborate with different artists on each architectural project. Their success can be attributed to their skills in revealing unfamiliar or unknown relationships by utilizing innovative materials. 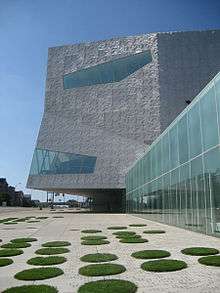 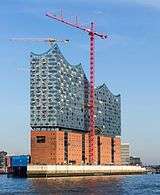