Jane Frances de Chantal was born in Dijon, France, on 28 January 1572, the daughter of the royalist president of the Parliament of Burgundy. Her mother died when Jane was 18 months old. Her father became the main influence on her education. She developed into a woman of beauty and refinement, lively and cheerful in temperament.[1] She married the Baron de Chantal when she was 21 and then lived in the feudal castle of Bourbilly. Baron de Chantal was accidentally killed by an arquebus while out shooting in 1601. Left a widow at 28, with four children, the broken-hearted baroness took a vow of chastity. Her mother, step mother, sister, first two children and now her husband had died.[2] Chantal gained a reputation as an excellent manager of the estates of her husband, as well as of her difficult father-in-law, while also providing alms and nursing care to needy neighbors.

During Lent in 1604, the pious baroness met Saint Francis de Sales, the bishop of Geneva who was preaching at the Sainte Chapelle in Dijon. They became close friends and de Sales became her spiritual director. She wanted to become a nun but he persuaded her to defer this decision.[1] Later, with his support, and that of her father and brother (the archbishop of Bourges), and after providing for her children, Chantal left for Annecy, to start the Congregation of the Visitation. The Congregation of the Visitation was canonically established at Annecy on Trinity Sunday, 6 June 1610.[2] The order accepted women who were rejected by other orders because of poor health or age. During its first eight years, the new order also was unusual in its public outreach, in contrast to most female religious who remained cloistered and adopted strict ascetic practices. The usual opposition to women in active ministry arose and Francis de Sales was obliged to make it a cloistered community following the Rule of St. Augustine. He wrote his Treatise on the Love of God for them.[1] When people criticized her for accepting women of poor health and old age, Chantal famously said, "What do you want me to do? I like sick people myself; I'm on their side."

Her reputation for sanctity and sound management resulted in many visits by (and donations from) aristocratic women. The order had 13 houses by the time de Sales died, and 86 before Chantal herself died at the Visitation Convent in Moulins, aged 69. St. Vincent de Paul served as her spiritual director after de Sales' death. Her favorite devotions involved the Sacred Heart of Jesus and the Heart of Mary.[3] Chantal was buried in the Annecy convent next to de Sales.[2] The order had 164 houses by 1767, when she was canonized. Chantal outlived her son (who died fighting Huguenots and English on the Île de Ré during the century's religious wars) and two of her three daughters, but left extensive correspondence. Her granddaughter also became a famous writer, Marie de Rabutin-Chantal, marquise de Sévigné. 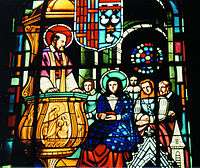 Saint Jane Frances's feast day was included in the General Roman Calendar in 1769, two years after she was canonized. Her feast was set as 21 August. In the 1969 revision of the calendar, her feast was moved to 12 December, to be closer to the day of her death, which occurred on 13 December 1641, the feast of St. Lucy.[4] In 2001, St. Pope John Paul II included in the General Roman Calendar the memorial of Our Lady of Guadalupe on 12 December.[5] Consequently, he moved the memorial of Saint Jane Frances to 12 August.[6]