Order of the Visitation of Holy Mary

History of the Order 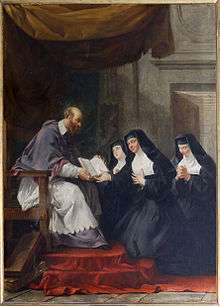 St. Francis de Sales giving the Rule for the Order of the Visitation of Holy Mary to St. Jane Frances de Chantal.

The Order of the Visitation was founded in 1610 by Saint Francis de Sales and Saint Jane Frances de Chantal in Annecy, Haute-Savoie, France. At first the founder had not a religious order in mind; he wished to form a congregation without external vows, where the cloister should be observed only during the year of novitiate, after which the sisters should be free to go out by turns to visit the sick and poor. The order was given the name of The Visitation of Holy Mary with the intention that the Sisters would follow the example of Virgin Mary and her joyful visit to her kinswoman Elizabeth, (known as "The Visitation" in the Roman Catholic Church).

He invited Jane de Chantal to join him in establishing a new type of religious life, one open to older women and those of delicate constitution, that would stress the hidden, inner virtues of humility, obedience, poverty, even-tempered charity, and patience, and founded on the example of Mary in her journey of mercy to her cousin Elizabeth.[2] The order was established to welcome those not able to practice austerities required in other orders.[3] Instead of chanting the canonical office in the middle of the night the sisters recited the Little Office of the Blessed Virgin at half-past eight in the evening. There was no perpetual abstinence nor prolonged fast. The Order of the Visitation of Mary was canonically erected in 1618 by Paul V who granted it all the privileges enjoyed by the other orders. A Bull of Urban VIII solemnly approved it in 1626.[1]

The special charism of the Visitation Order is an interior discipline expressed primarily through the practice of two virtues: humility and gentleness.[4] The motto of the order is "Live Jesus".[3] 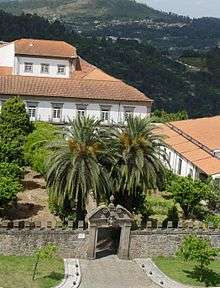 The Monastery of the Sisters of the Visitation in Braga, Portugal.

The Order of the Visitation is present in Portugal since 1784, maintaining today three monasteries: in Braga, in Vila das Aves and in Batalha. The Sisters of the Visitation in Portugal produce and distribute the emblems of the Sacred Heart of Jesus (like devotional scapulars) as Saint Margaret Mary Alacoque did in the past.

At the French Revolution in 1789 when all the religious houses were suppressed many of the French Sisters took refuge in other Catholic countries. The sisters in Rouen, northern France, fled to Portuguese monasteries, having only escaped the guillotine by the death of Robespierre in 1794. In 1803 six sisters left Lisbon in an English packet ship and while at sea they were attacked by French pirates. They were spared because of their nationality (they were French not English) and were returned safely to the Spanish seaport of Vigo. After a brief sojourn in Spain three of the Sisters made a second attempt to cross from Porto and without further encounters with pirates arrived in Falmouth on 29 January 1804. They later journeyed to Acton and founded the first monastery of the Visitation on English soil on 19 March 1804.[5]

The Visitation Sisters came to Ireland in 1955 and founded a Monastery at Stamullen, Co. Meath. When Mother Mary Teresa O’ Dwyer, Superior of the Visitation Monastery of Roseland, England learned that the Brothers of St. John of God were moving out of Silverstream, she applied to the Bishop of Meath, Dr. Kyne for permission for the order of the Visitation to enter his diocese. Staffing problems were solved by borrowing three Sisters from America. The Visitation Monasteries of St. Paul Minnesota, Brooklyn New York and Atlanta Georgia each lent a Sister.[6]

Sisters of the Second Federation add apostolic monasteries to their contemplative life.

The Mount de Chantal Visitation Academy was founded in 1848 as the Wheeling Female Academy in downtown Wheeling, West Virginia and in 1865 assumed its current name. While grades five through twelve were all female, Mount de Chantal's Montessori and Elementary schools were co-ed. The school ceased operations on May 31, 2008, and the nuns re-located to the Georgetown Visitation in Washington, D.C. The building was listed on the National Register of Historic Places in 1978, before being razed on November 7, 2011.

The best known saint of the Order is St. Margaret Mary Alacoque, who reportedly received the revelations of the Sacred Heart resulting in the First Friday Devotions and Holy Hours. On May 10, 1998, seven Visitandines of the First Monastery of Madrid, Spain, martyred during the Spanish Revolution of 1936, were beatified in Rome by Pope John Paul II.

The nuns were members of the Madrid House of the Order of the Visitation. In early 1936, during the Spanish Civil War, as religious persecution intensified, most of the community moved to Oronoz, leaving a group of six nuns in the charge of Sr Maria Gabriela de Hinojosa. By July they were confined to their apartment, When a neighbour reported them to the authorities, and in November 1936 their apartment searched. Nevertheless, they refused to seek refuge in the consulates.[16]

The following evening, a patrol of the Iberian Anarchist Federation broke into the apartment and ordered all the sisters to leave. They were taken by van to a vacant area and shot. Sr Maria Cecilia, who had run when she felt the sister next to her fall, surrendered shortly after and was shot five days later at the cemetery wall in Vallecas on the outskirts of Madrid.[16]

In 2010, in honor of the worldwide Jubilee Year for the Visitation order, Pope Benedict XVI granted a plenary indulgence to those who would make a visit to and pray in a Visitation monastery.[17]

Léonie Martin, the sister of Saint Thérèse of the Child Jesus and the Holy Face, became a nun of the Order of the Visitation. She received the veil on the 2nd of July 1900 and took the name Sister Françoise-Thérèse Martin. On the 24 January 2015 the process for Leonie's beatification began and she is now known as Servant of God.[18]