St. Charles County is a county in the eastern part of the U.S. state of Missouri. As of the 2010 census, the population was 360,485,[1] making it Missouri's third-most populous county. Its county seat is St. Charles.[2] The county was organized October 1, 1812 and named for Saint Charles Borromeo, an Italian cardinal. The county executive is Steve Ehlmann, since January 2007.

St. Charles County is part of the St. Louis, MO-IL Metropolitan Statistical Area and contains many of the city's northern suburbs.

The wealthiest county in Missouri,[3] St. Charles County is one of the nation's fastest-growing counties. The county is also recognized as very conservative, ranking in the top 100 nationally, and many residents support a gun culture.[4]

St. Charles County includes an area of vineyards and wineries whose distinction has been nationally recognized. On its rural outer edge along the south-facing bluffs above the Missouri River is an area of numerous wineries, so that Missouri Route 94 is sometimes called the Missouri Weinstrasse. The area includes the Augusta AVA, designated in 1980 as the first American Viticultural Area by the federal government. 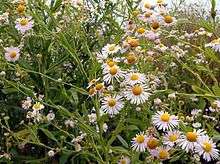 St. Charles County is the only known habitat of the decurrent false aster (Boltonia decurrens) in Missouri. Listed as threatened by the U.S. Fish and Wildlife Service and as Endangered by the Missouri Department of Conservation, it is declining due to loss of wetlands habitat.[6]

St. Charles County, with an estimated population of 373,495, has been one of the fastest-growing counties in the country for decades, with 55% growth in the 1970s, 48% in the 1980s, 33% in the 1990s, and another 27% in the 2000s. The county features a cross-section of industry, as well as extensive retail and some agriculture. With the Missouri River on the south and east and the Mississippi River on the north, the county is bisected east to west by Interstate 70. St. Charles County has two small airports, St. Charles County Smartt Airport and St. Charles Airport, and two ferries that cross the Mississippi River.

The Republican Party predominantly controls politics at the local level in St. Charles County. Republicans hold all the elected positions in the county.[17]

St. Charles County is divided into twelve legislative districts in the Missouri House of Representatives, eleven of which are held by Republicans and one held by a Democrat.

St. Charles County is divided into two districts in the Missouri Senate, both of which have elected Republicans.

Part of St. Charles County is included in Missouri’s 2nd Congressional District and is currently represented by Ann Wagner in the U.S. House of Representatives.

Most of St. Charles County is included in Missouri’s 3rd Congressional District and is currently represented by Blaine Luetkemeyer (R-St. Elizabeth) in the U.S. House of Representatives.

Former U.S. Senator Hillary Clinton (D-New York) received more votes, a total of 23,611, than any candidate from either party in St. Charles County during the 2008 presidential primary.