Jeanne Elizabeth Crain (May 25, 1925 – December 14, 2003) was an American actress whose career spanned from 1943 to 1975. She received an Academy Award nomination for Best Actress in the 1949 film Pinky, in which she played the leading role. She was also noted for her ability in ice skating.

Crain was born in Barstow, California, to George A. Crain, a school teacher, and Loretta Carr; she was of Irish Catholic parents.[1] By 1930, the family was living in Inglewood at 822 S Walnut Ave.[2] After her parents divorced in 1934, the family of three moved to 5817 Van Ness Ave in Los Angeles.[3]

An excellent ice skater, Crain first attracted attention when she was crowned Miss Pan Pacific at the Pan-Pacific Auditorium in Los Angeles. Later, while still in high school, she was asked to make a screen test opposite Orson Welles. She did not get the part, but in 1943, at age 18, she appeared in a bit part in the film The Gang's All Here. 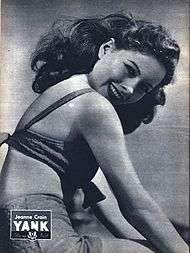 Crain's film debut came in Home in Indiana in 1944;[4] that same year, she starred in In the Meantime, Darling. Her acting was critically panned, but she gained nationwide attention. It resulted in landing the leading role in The Shocking Miss Pilgrim in October 1944, a musical film which was eventually made with Betty Grable as the star.[5]

Crain first received critical acclaim when she starred in Winged Victory (1944). She co-starred in 1945 with Dana Andrews in the musical film State Fair, in which Louanne Hogan dubbed Crain's singing numbers. After that, Crain often had singing parts in films, and they were invariably dubbed, in most cases by Hogan. Also in 1945, Crain starred in Leave Her to Heaven with Gene Tierney. Her ice skating ability was on display in the 1946 film, Margie, in which she and Conrad Janis danced around the ice rink as her boyfriend, Alan Young, slipped and stumbled his way along the ice.

She made two films in 1948, You Were Meant for Me, a musical with Dan Dailey, that might have been Marilyn Monroe's first appearance on film, and Apartment for Peggy, with William Holden. The latter film, a romantic and endearing piece with veteran Edmund Gwenn, examined the very real problems faced by millions of returning vets and their wives. After the tumult of war, and eager for better lives, many former GI's flooded college campuses, taking advantage of opportunities now available to them, under the new GI Bill. However, jobs and housing were both in very short supply, as the film portrays in a humorous and gentle light, with scenes of wives left behind by their husbands' new-found knowledge, and the communal experiences at the laundromat. Gwenn, coming off his best year in films, in 1947's Miracle on 34th Street, Life with Father, Thunder in the Valley, and Green Dolphin Street, provided comic relief in his usual understated way, as Professor Henry Barnes, a curmudgeon set in his ways, until he encounters the force-of-nature Peggy, played by Crain, in desperate need of a place to live. In short order, she has the Professor wrapped around her little finger, with husband, dog and cat ensconced in his attic, and even gets him to help the wives understand the topics their husbands are studying. The film is a tour de force for Crain, as she cracks wise, in rapid-fire patter, and quotes statistics she makes up out of whole cloth, to substantiate whatever point she's trying to make.

In 1949, Crain appeared in three films — A Letter to Three Wives, The Fan, and Pinky, the last earning her a nomination the Academy Award for Best Actress. Pinky was controversial, since it told the story of a light-skinned African American woman who passes for white in the Northern United States. Although Lena Horne and other black actresses were considered, producer Darryl F. Zanuck chose to cast a white actress for fear of racial backlash.

Crain starred opposite Myrna Loy and Clifton Webb in the 1950 biographical film Cheaper by the Dozen. Next, Crain paired with Cary Grant in the Joseph L. Mankiewicz film of the offbeat drama People Will Talk (1951). Despite Jeanne heavily campaigning for the female lead, Anne Baxter was initially cast in the part, but when she had to forfeit due to pregnancy, Crain was given the role after all.[6] Shortly after, she starred in Charles Brackett's production The Model and the Marriage Broker (1951). Cast in May 1951, Crain was Brackett's first choice for the role.[7] Crain was reunited with Loy for Belles on Their Toes (1952), the sequel to Cheaper by the Dozen.

While still at 20th Century Fox, Crain played a young wife quickly losing her mind amidst high-seas intrigue in Dangerous Crossing (1953), co-starring Michael Rennie. Crain then starred in a string of films for Universal Pictures, including a notable pairing with Kirk Douglas in Man Without a Star (1955).

Crain showed her dancing skills in 1955's Gentlemen Marry Brunettes co-starring Jane Russell, Alan Young, and Rudy Vallee. The production was filmed on location in Paris. The film was based on Anita Loos' novel, a sequel to Gentlemen Prefer Blondes. Gentlemen Marry Brunettes was popular throughout Europe at the time and was released in France as A Paris Pour les Quatre (To Paris for the Four), and in Belgium as Cevieren Te Parijs. Later in the 1950s, Crain, Russell, and another actress formed a short-lived singing and dancing lounge act on the Las Vegas Strip.

In 1956, Crain starred opposite Glenn Ford, Russ Tamblyn, and Broderick Crawford in the Western film The Fastest Gun Alive directed by Russell Rouse. In 1957, she played a socialite who helps a floundering singer and comedian (Frank Sinatra) redeem himself in The Joker Is Wild.

In 1959, Crain appeared in a CBS special television production of Meet Me in St. Louis. Also starring in the broadcast were Loy, Walter Pidgeon, Jane Powell, and Ed Wynn, with top billing going to Tab Hunter. Film roles became fewer in the 1960s as Crain went into semiretirement. She appeared as Nefertiti in the Italian production of Nefertiti, Queen of the Nile (1961) with Edmund Purdom and Vincent Price. During this period, Crain appeared - for the second time - as one of the mystery guests on the CBS game show What's My Line?, and made guest appearances on the NBC Western series, Riverboat, with Darren McGavin, and the ABC detective series, Burke's Law, starring Gene Barry.

At the top of her stardom, in the late 1940s and early 1950s, Crain was nicknamed 'Hollywood's Number One party girl', and she was quoted saying that she was invited to at least 200 parties a year.[9]

During the early 1950s, Crain was earning about $3,500 per week. Crain and her husband bought a large home for their growing family on Roxbury Drive in Beverly Hills. The home can be seen and is described by Bette Davis in candid footage of a driving sequence in the film The Star (1952).

The marriage was rocky for some years. In the mid-1950s, Crain obtained an interlocutory divorce decree, each spouse claiming the other had been unfaithful (she also claimed Brinkman had been abusive), but the couple reconciled December 31, 1956.[11]

In the early 1960s, she was one of many conservative actors who spent their time fervently fighting for the Republican cause.[12]

Crain and her husband remained married, although they lived separately in Santa Barbara until Brinkman's death in October 2003.

Crain died a few months later and the cause was later confirmed as a heart attack.[13] Crain's funeral mass was held at the Old Santa Barbara Mission. She is buried in the Brinkman family plot at Santa Barbara Cemetery. The Brinkmans were survived by five adult children,[14] including Paul Brinkman, Jr., a television executive, most known for his work on the television series JAG.

Crain's career is fully documented by a collection of memorabilia about her assembled by Charles J. Finlay, a longtime publicist at 20th Century Fox. The Jeanne Crain Collection resides at the Cinema Archives at Wesleyan University in Middletown, Connecticut. These archives also hold the papers of Ingrid Bergman, Frank Capra, Clint Eastwood, and others.[15]