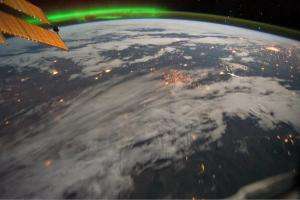 This video was taken by the crew of Expedition 29 on board the ISS on a pass over the Northern United States at night.

The Northern United States, commonly referred to as the American North or simply the North, can be a geographic or historical term and definition.

Geographically, the term includes the U.S. states and regions of the United States of America that are located across the northernmost part of the country. It includes, but is not limited to, states along the Canadian-American border.

During the American Civil War, the Northern United States was composed of the U.S. states that remained in the United States of America, the Union states. In this context, "The North" is synonymous with the Union. In this context, "The South" is composed of the states that seceded from the U.S. to form the Confederate States of America. However, which states comprised "The North" in this context can be the subject of historical disagreement. Some slave-holding states that remained in the Union may be excluded.[2]