Anne Baxter (May 7, 1923 – December 12, 1985) was an American actress of screen and stage. She won the Academy Award for Best Supporting Actress for her role as Sophie in the 1946 film The Razor's Edge, and received an Academy Award nomination for Best Actress for the title role in the 1950 film All About Eve. Her other films included The Magnificent Ambersons (1942), I Confess (1953) and The Ten Commandments (1956).[1]

Baxter was born in Michigan City, Indiana, to Catherine Dorothy (née Wright; 1894–1979)[2]—whose father was the famed architect Frank Lloyd Wright—and Kenneth Stuart Baxter (1893–1977), a prominent executive with the Seagrams Distillery Company. When Baxter was five, she appeared in a school play and, as her family had moved to New York when she was six years old, Baxter continued to act. She was raised in Westchester County, NY [3] and attended Brearley.[4] At age 10, Baxter attended a Broadway play starring Helen Hayes, and was so impressed that she declared to her family that she wanted to become an actress. By the age of 13, she had appeared on Broadway in Seen but Not Heard. During this period, Baxter learned her acting craft as a student of the famed teacher Maria Ouspenskaya. In 1939 she was cast as Katherine Hepburn's little sister in the play The Philadelphia Story, but Hepburn did not like Baxter's acting style and she was replaced during the show's pre-Broadway run. Rather than giving up, she turned to Hollywood.[5] 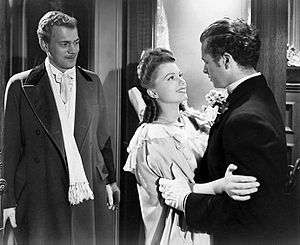 At 16, Baxter screen-tested for the role of Mrs. DeWinter in Rebecca, losing to Joan Fontaine because director Alfred Hitchcock deemed Baxter too young for the role, but she soon secured a seven-year contract with 20th Century Fox. Her first movie role was in 20 Mule Team in 1940. She was chosen by director Orson Welles to appear in The Magnificent Ambersons (1942). In 1943, she played a French maid in a north African hotel (with a credible French accent) in Billy Wilder's Five Graves to Cairo.[6] Baxter co-starred with Tyrone Power and Gene Tierney in 1946's The Razor's Edge, for which she won the Academy Award for Best Supporting Actress. Baxter later recounted that The Razor's Edge contained her only great performance, a hospital scene where the character, Sophie, "loses her husband, child and everything else." She said she relived the death of her brother, who had died at age three.[7] She played Mike in the 1948 Western film Yellow Sky with Gregory Peck and Richard Widmark. 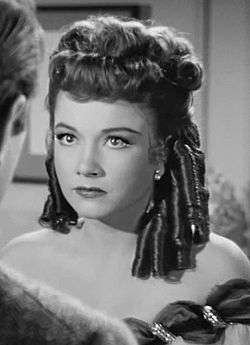 Baxter as Eve Harrington in All About Eve (1950)

Baxter with Yul Brynner in The Ten Commandments (1956)

In 1950, Baxter was chosen to co-star in All About Eve, largely because of a resemblance to Claudette Colbert, who was originally set to star but dropped out and was replaced by Bette Davis. The original idea was to have Baxter's character gradually come to mirror Colbert's over the course of the film. Baxter received an Academy Award nomination for Best Actress for the title role of Eve Harrington. She said she modeled the role on a bitchy understudy she had for her debut performance in the Broadway play Seen But Not Heard at the age of thirteen and who had threatened to "finish her off."[7] Through the 1950s she continued to act on stage. In 1953, Baxter contracted a two-picture deal for Warner Brothers. Her first was opposite Montgomery Clift in Alfred Hitchcock's I Confess; the second was the whodunit The Blue Gardenia as a woman accused of murder.[7]

Baxter is also remembered for her role as the Egyptian throne princess Nefretiri opposite Charlton Heston's portrayal of Moses in Cecil B. DeMille's award-winning The Ten Commandments (1956).

She worked regularly in television in the 1960s. She appeared as one of the What's My Line? "Mystery Guests" on the popular Sunday night CBS-TV gameshow. She also starred as guest villain "Zelda The Great" in episodes 9 and 10 of the Batman series. She appeared as another villain, "Olga, Queen of the Cossacks", opposite Vincent Price's "Egghead" in three episodes of the show's third season. She also played an old flame of Raymond Burr on his crime series Ironside.

Baxter returned to Broadway during the 1970s in Applause, the musical version of All About Eve, but this time in the "Margo Channing" role played by Bette Davis in the film (succeeding Lauren Bacall, who won a Tony Award in the role).

In the 1970s, Baxter was a frequent guest and guest host on The Mike Douglas Show, since Baxter and its star Mike Douglas were friends. She portrayed a murderous film star on an episode of Columbo, called "Requiem for a Fallen Star". In this episode, she portrayed a fading movie star called Nora Chandler, perhaps in homage to the fading movie star Margo Channing (Bette Davis) of All About Eve, in which Baxter also starred. In 1971, she also had a role in Fools' Parade, as an aging prostitute who helps characters played by Jimmy Stewart, Strother Martin, and Kurt Russell escape from the villain, played by George Kennedy, before an act of betrayal seals her fate. In 1983, Baxter starred in the television series Hotel, replacing Bette Davis after Davis became ill.

Baxter has a star on the Hollywood Walk of Fame at 6741 Hollywood Blvd.

In 1946, Baxter married actor John Hodiak. They had one daughter, Katrina, born 1951. Baxter and Hodiak divorced in 1953, which she later blamed on herself.[8] He died one-and-a-half years later.

Baxter was a Republican who was active in the campaigns of Thomas E. Dewey[9] and Dwight D. Eisenhower.[10]

In 1960, Baxter married her second husband, Randolph Galt. Galt was the American owner of a neighboring cattle station near Sydney, Australia, where she was filming Summer of the Seventeenth Doll. She left Hollywood with Katrina to live with him on a remote 14973 hectare (37,000 acre) cattle station he bought 290 km (180 miles) north of Sydney called Giro (pronounced Ghee-ro). During this time, they had two daughters, Melissa (b. 1962) and Maginel (b. 1963). After the birth of Maginel, back in California, Galt unexpectedly announced that they were moving to an 4452 hectare (11,000 acre) ranch south of Grants, New Mexico.[8] They then moved to Hawaii (his home state) before settling back in Brentwood, Los Angeles, California.[11] Baxter and Galt were divorced in 1969. In 1976, Baxter recounted her courtship with Galt (whom she called "Ran") and their experiences at Giro in a well-received book called Intermission. Melissa Galt became an interior designer and then a business coach, speaker and seminar provider.[12] Maginel became a cloistered Roman Catholic nun, reportedly living in Rome, Italy.[13][14]

Baxter married again, in 1977 to David Klee, a prominent stockbroker. It was a brief marriage; Klee died unexpectedly from illness. The newlywed couple had purchased a sprawling property in Easton, Connecticut, which they extensively remodeled; however, Klee did not live to see the renovations completed. Although she maintained a residence in West Hollywood, Baxter considered her Connecticut home to be her primary residence. Baxter was passionate about music and was an active benefactor of The Connecticut Early Music Society.

Baxter was a longtime friend of celebrated costume designer Edith Head, whom she first met on the set of Five Graves to Cairo. Head appeared with Baxter in a cameo role in "Requiem for a Fallen Star", a 1973 Columbo episode. Upon Head's death in 1981, Melissa Galt, who was also a goddaughter of Head,[15] was bequeathed Head's jewelry collection.

Baxter suffered a brain aneurysm on December 4, 1985,[16] while hailing a taxi on Madison Avenue in New York City. Baxter remained on life support for eight days in New York's Lenox Hill hospital, until family members agreed that brain function had ceased. She died on December 12, aged 62.[17] Baxter is buried on the estate of Frank Lloyd Wright at Lloyd Jones Cemetery in Spring Green, Wisconsin.[18] She was survived by her three daughters.[19]