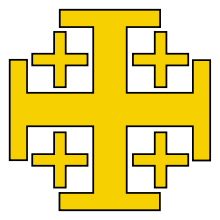 The arms of the Kingdom of Jerusalem, argent, a cross potent between four plain crosslets[1]

The Jerusalem cross (also known as "Crusaders' cross", "Five-fold Cross", or "cross-and-crosslets") is a heraldic cross and Christian cross variant consisting of a large cross potent surrounded by four smaller Greek crosses, one in each quadrant.

It is not to be confused with the Lorraine cross, which has also been called the "Jerusalem cross".[3] 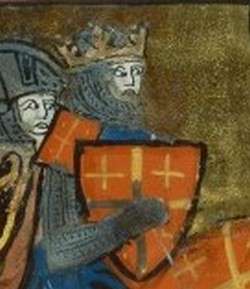 Depiction of the Jerusalem cross on a red (rather than silver) shield as the arms of Godfrey of Bouillon in a 14th-century miniature.[4] 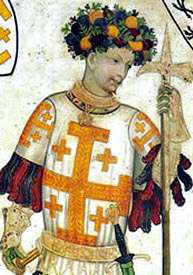 While the symbol of the five-fold cross appears to originate in the 11th century, its association with the Kingdom of Jerusalem dates to the second half of the 13th century.

The symbolism of the five-fold cross is variously given as the Five Wounds of Christ, Christ and the four evangelists, or Christ and the four quarters of the world. The symbolism of five crosses representing the Five Wounds is first recorded in the context of the consecration of the St Brelade's Church under the patronage of Robert of Normandy (before 1035); the crosses are incised in the church's altar stone.

The "cross-and-crosslets" or "Tealby" pennies minted under Henry II of England during 1158–1180 have the "Jerusalem cross" on the obverse, with the four crosslets depicted as decussate (diagonal).[5] Similar cross designs on the obverse of coins go back to at least the Anglo-Saxon period.[6]

The emblem used on the seals of the rulers of Jerusalem during the 12th century was a simplified depiction of the city itself, showing the tower of David between the Dome of the Rock and the Holy Sepulchre, surrounded by the city walls. The coins minted in Jerusalem during the 12th century show patriarchal crosses with various modifications. Coins minted under Henry I (r. 1192–1197) show a cross with four dots in the four quarters, but the Jerusalem cross proper appears only on a coin minted under John II (r. 1284/5).[7]

At about the same time, the cross of Jerusalem in gold on a silver field appears as the coat of arms of the Kingdom of Jerusalem in early armorials such as the Camden Roll. The arms of the King of Jerusalem featured gold on silver (in the case of John de Brienne, silver on gold), a metal on a metal, and thus broke the heraldic Rule of Tincture; this was justified by the fact that Jerusalem was so holy, it was above ordinary rules. The gold and silver were also connected to Psalms 68:14, which mentions a "dove covered in silver, and her feathers with yellow gold".[1]

The Jerusalem cross on a 1556 Testoon of Mary, Queen of Scots.

Carlo Maggi, a Venetian nobleman who had visited Jerusalem and was made a knight of the Order of the Holy Sepulchre in the early 1570s, included the Jerusalem cross in his coat of arms.

There is a historiographical tradition that Peter the Great flew a flag with a variant of the Jerusalem cross in his campaign in the White Sea in 1693.[10] 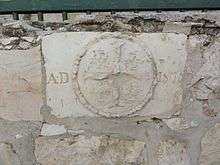 Jerusalem cross in relief, dated "AD 1875", on the wall of the Dominus Flevit Church in Jerusalem. 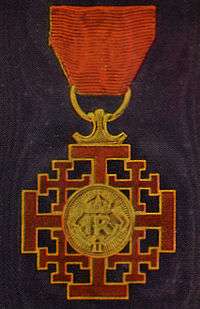 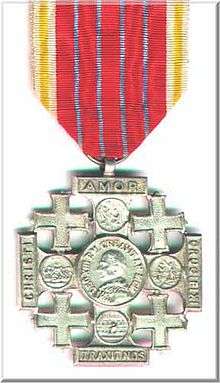 Jerusalem Pilgrim's Cross, courtesy of the Franciscan Custody of the Holy Land.

A banner with a variation of the Jerusalem cross was used at the proclamation of the Revolution on Mount Pelion Anthimos Gazis in May 1821 in the Greek War of Independence.[11]

The papal Order of the Holy Sepulchre uses the Jerusalem cross as its emblem. It is also used by the Custodian of the Holy Land, head of the Franciscan friars who serve at the holy Christian sites in Jerusalem.

In the early 20th century, the Jerusalem cross also came to be used as a symbol of world evangelisation in Protestantism. A derived design known as the "Episcopal Church Service Cross" was first used during World War I by the Anglican Episcopal Church in the United States.[13] The Jerusalem cross was chosen as the emblem of the Deutscher Evangelischer Kirchentag (German Evangelical Church Congress) in the 1950s, since the 1960s shown in a simplified form where the central Cross potent is replaced by a simple Greek cross.[14]

The modern flag of Georgia was introduced in 2004 on the basis of the flag of Tbilisi shown in the Pizzigano chart.