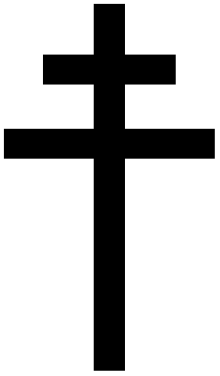 The Byzantine Christianization came to the Morava empire in the year 863, provided at the request of Rastislav sent Byzantine Emperor Michael III.[1] The symbol, often referred to as the patriarchal cross, appeared in the Byzantine Empire in large numbers in the 10th century. For a long time, it was thought to have been given to Saint Stephen by the pope as the symbol of the apostolic Kingdom of Hungary.

The two-barred cross is one of the main elements in the coats of arms of Hungary since 1190. It appeared during the reign of King Béla III, who was raised in the Byzantine court. Béla was the son of Russian princess Eufrosina Mstislavovna. The cross appears floating in the coat of arms and on the coins from this era. In medieval Kingdom of Hungary was extended Byzantine Cyril-Methodian and western Latin church was expanded later.[2]

The two-barred cross in the Hungarian coat of arms comes from the same source of Byzantine (Eastern Roman) Empire in the 12th century. Unlike the ordinary Christian cross, the symbolism and meaning of the double cross is not well understood.

The top beam represents the plaque bearing the inscription "Jesus of Nazareth, King of the Jews" (often abbreviated in the Latinate "INRI", and in the Greek as "INBI"). A popular view is that the slanted bottom beam is a foot rest, however there is no evidence of foot rests ever being used during crucifixion, and it has a deeper meaning. The bottom beam may represent a balance of justice. Some sources suggest that, as one of the thieves being crucified with Jesus repented of his sin and believed in Jesus as the Messiah and was thus with Christ in Paradise, the other thief rejected and mocked Jesus and therefore descended into Hades.

Many symbolic interpretations of the double cross have been put forth. One of them says that the first horizontal line symbolized the secular power and the other horizontal line the ecclesiastic power of Byzantine emperors. Also, that the first cross bar represents the death and the second cross the resurrection of Jesus Christ.

The Russian cross can be considered a modified version of the Patriarchal cross, having two smaller crossbeams, one at the top and one near the bottom, in addition to the longer crossbeam. One suggestion is the lower crossbeam represents the footrest (suppedaneum) to which the feet of Jesus were nailed. In some earlier representations (and still currently in the Greek Church) the crossbar near the bottom is straight, or slanted upwards. In later Slavic and other traditions, it came to be depicted as slanted, with the side to the viewer's left usually being higher. During 1577–1625 the Russian use of the cross was between the heads of the double-headed eagle in the coat of arms of Russia.

One tradition says that this comes from the idea that as Jesus Christ took his last breath, the bar to which his feet were nailed broke, thus slanting to the side. Another tradition holds that the slanted bar represents the repentant thief and the unrepentant thief that were crucified with Christ, the one to Jesus' right hand repenting and rising to be with God in Paradise, and one on his left falling to Hades and separation from God. In this manner it also reminds the viewer of the Last Judgment.

Still another explanation of the slanted crossbar would suggest the Cross Saltire, as tradition holds that the Apostle St. Andrew introduced Christianity to lands north and west of the Black Sea: today's Ukraine, Russia, Belarus, Moldova, and Romania.

Another form of the cross was used by the Jagiellonian dynasty in Poland. This cross now features on the coat of arms of Lithuania, where it appears on the shield of the knight. It is also the badge of the Lithuanian Air Force and forms the country's highest award for bravery, the Order of the Cross of Vytis.

The Patriarchal Cross appears on the Pahonia, used at various times as the coat of arms of Belarus.

Unicode defines the character ☦ (Russian cross) and ☨ (Cross of Lorraine) in the Miscellaneous Symbols range at codepoint U+2626 and U+2628 respectively.