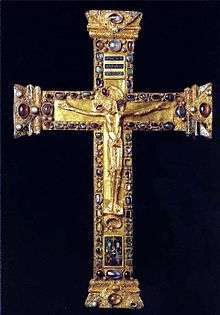 A processional cross is a crucifix or cross which is carried in Christian processions.[1] Such crosses have a long history: the Gregorian mission of Saint Augustine of Canterbury to England carried one before them "like a standard", according to Bede. Other sources suggest that all churches were expected to possess one. They became detachable from their staffs, so that the earliest altar crosses were processional crosses placed on a stand at the end of the procession. In large churches the "crux gemmata", or richly jewelled cross in precious metal, was the preferred style. Notable early examples include the Cross of Justin II (possibly a hanging votive cross originally), Cross of Lothair, and Cross of Cong.[2] 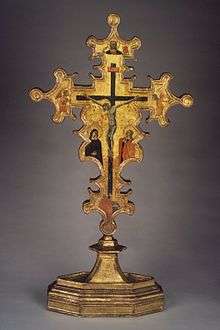 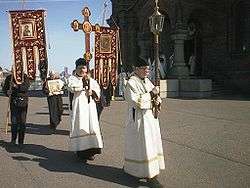 In the Eastern Orthodox Church, there are different traditions surrounding the use of the processional cross. Traditional practice, still followed among churches of the Russian or other Slavic traditions, is that the use of the processional cross during the normal cycle of divine services is a primatial privilege, and will only be done when the Patriarch or First Hierarch is serving. In the modern Greek tradition, the processional Cross is often carried during the Entrance at Vespers, and during the Lesser and Great Entrances at the Divine Liturgy, regardless of whether the celebrant is a primate.

In all traditions, the cross is carried in outdoor processions, known as cross-processions for such events as Palm Sunday, Paschal Matins, during Bright Week, processions to honour the relics or icon of a saint, or on other festal occasions. On its patronal feast day a parish church or monastery will often serve a moleben (intercessory prayer service) during which a cross-procession will take place around the outside of the church. The processional cross is also used at funerals.

During an outdoor procession, the cross will usually be preceded by a large processional lantern and a deacon with thurible (incense). Religious banners and icons will follow. Then the chanters and clergy, and finally the people.

When not in use, the processional cross may be placed in the sanctuary, behind the Holy Table (altar). 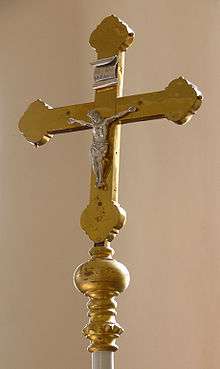 In the Roman Catholic and Anglican churches, processional crosses are used in processions preceded by incense and flanked or followed with candles. The cross is brought up to the altar by an altar server who has been chosen to serve as crucifer.

In some Methodist, Lutheran and Reformed (Presbyterian) churches the processional cross is brought up to the altar or Chancel by a crucifer at the beginning of the service and placed at the altar, then acting as an Altar cross.[3] The acolytes that follow then bow to the cross at the altar. The Cross represents the Lord's presence at the altar.[4]