Jetstar Airways Pty Ltd, trading as Jetstar, is an Australian low-cost airline (self-described as "value based")[4] headquartered in Melbourne.[5][6] It is a wholly owned subsidiary of Qantas, created in response to the threat posed by low-cost airline Virgin Blue. Jetstar is part of Qantas' two brand strategy[7] of having Qantas Airways for the premium full-service market and Jetstar for the low-cost market. Jetstar carries 8.5% of all passengers travelling in and out of Australia.[8]

The airline operates an extensive domestic network as well as regional and international services from its main base at Melbourne Airport,[9] using a mixed fleet of the Airbus A320 family and the Boeing 787 Dreamliner. Like its Qantas parent, Jetstar competes with Virgin Australia and its fully owned low-cost subsidiary Tigerair Australia.[10]

The airline was established by Qantas in 2003 as a low-cost domestic subsidiary. Qantas had previously acquired Impulse Airlines on 20 November 2001 and operated it under the QantasLink brand, but following the decision to launch a low-cost carrier, re-launched the airline under the Jetstar brand.[9] Domestic passenger services began on 25 May 2004, soon after the sale of tickets for her inaugural flight in February 2004. International services to Christchurch, New Zealand, commenced on 1 December 2005. Although owned by Qantas, its management operates largely independent of Qantas through the company formerly known as Impulse Airlines.

Reserved seating is currently provided on all routes and on 4 October 2006, Jetstar became the first Australian airline to allow customers to select their seat upon booking.[15]

The first flight of sister airline Jetstar Asia Airways took off from its Singapore hub to Hong Kong on 13 December 2004. This marked Qantas' entry into the Asian low-cost market and signified its intention to battle key competitor Singapore Airlines on its home ground. Qantas has a 42.5% stake in Jetstar Asia's ownership.

Jetstar Airbus A330-200 about to land at Sydney

On 1 December 2005, Jetstar commenced operations from Sydney, Melbourne, Brisbane and the Gold Coast to Christchurch in New Zealand. On 7 December 2005, it was announced that Jetstar would establish the world's first global low-cost airline. At the end of 2005, it was announced that Jetstar would fly to Perth, from Avalon Airport.

In July 2006, Jetstar and Jetstar Asia were brought together under the Jetstar brand.[16] Online bookings for both carriers were integrated into Jetstar.com.

On 1 August 2008, Jetstar announced that it had signed an agreement with the Northern Territory Government to make Darwin International Airport an international hub with plans for seven aircraft to be based in Darwin. Under the agreement Jetstar would be required to base three aircraft at Darwin by June 2009, with a further four by June 2012, with the Northern Territory Government to provide $5 million to set up the hub and a further $3 million for promotion of the new routes.[17] In December 2013, Jetstar announced that it would be closing the Darwin base in May 2014 and re-positioning the based aircraft to Adelaide. Flights to Tokyo via Manila were to be discontinued while services to Singapore would be operated by Jetstar Asia with Singapore-based aircraft.[18] The base closure was attributed to cost-cutting measures by parent company Qantas as well as increased competition from the re-introduction of flights by Asian carriers into Darwin airport.

From 1 February 2011, Jetstar started its co-operation with the oneworld alliance, allowing people booking an itinerary with a full oneworld member to include a Jetstar flight in the itinerary. However, the flight must be sold via Jetstar's corporate parent Qantas, under a QF flight number.[19]

In August 2011, Jetstar's parent Qantas announced that it would set up a new airline to be called Jetstar Japan, a joint venture of Jetstar, Japan Airlines, and Mitsubishi. The airline was expected to start operating in December 2012,[20] but then launched ahead of schedule on 3 July 2012.[21]

In March 2012, another Asian Jetstar branded airline was announced, Jetstar Hong Kong, a strategic partnership between Qantas and China Eastern Airlines, which was expected to commence operations in 2013.[22] Although it took delivery of aircraft, Jetstar Hong Kong never commenced operations. 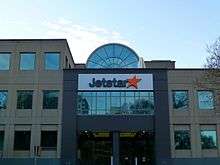 Jetstar headquarters in the Melbourne suburb of Collingwood

In November 2013, Jetstar moved its head office from Melbourne's CBD to the suburb of Collingwood. In February 2014, Jetstar signed a codeshare agreement with Emirates Airlines as a continuation of the agreement between Emirates and Qantas, Jetstar's parent airline.

In mid-2014, the Australian Competition and Consumer Commission (ACCC) took legal action against Jetstar and competitor Virgin Australia in respect of drip pricing.[23][24] In November 2015 the Federal Court of Australia found that the ACCC's claims that the two airlines engaged in misleading and deceptive conduct by carrying out drip pricing were proven.[25]

In June 2015, Jetstar announced that it would commence regional services in New Zealand, beginning in December 2015. The new services would be flown by five turboprop Bombardier Dash 8s operated by Eastern Australia Airlines—one of Qantas' subsidiary regional airlines—under the Jetstar brand. At least four new destinations would be served initially, with Hamilton, Rotorua, New Plymouth, Napier, Palmerston North, Nelson and Invercargill named as the cities under consideration.[26] On 31 August 2015, Jetstar announced it had selected the first four regional centres it would serve at the commencement of operations on 1 December; these were Napier, Nelson, New Plymouth and Palmerston North. All four cities have services to Auckland; Nelson also has services to Wellington.[27]

A Boeing 717 formerly operated by Jetstar 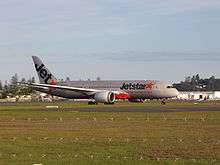 Jetstar Airways has codeshare agreements with the following airlines:[28]

As of December 2016 the Jetstar Airways fleet consists of the following aircraft:[29]

^Note 1 Qantas placed an order for 110 A320s in 2011, with 11 allocated to a planned new Qantas Group premium airline in Asia (never actually established) and 99 to the various Jetstar-branded airlines — including Jetstar Hong Kong, which received aircraft but never commenced operations.[31][32] The order consisted of 32 classic A320s and 78 A320neos, with scope to convert some to A321s.

From 2004 to 2006, the airline's mascot, Julie The Jetstar Girl, was played by actress Magda Szubanski.

The advertising slogan of Jetstar is "All day every day low fares". In 2006, the jingle "Let's Fly Jetstar tonight" and the use of Szubanski ceased and was replaced with "It's All About Choice / Fly Away" (later "Low Fares, Good Time").

Jetstar Airways was the major sponsor of the National Rugby League team, the Gold Coast Titans [33] until 2012 when it taking over by Iselect (2013 - 2015) then to Aquis in mid 2015. In July 2008 Jetstar Airways was named the Official Airline of the Australian national rugby league team. One of its A320s was decorated with special decals to advertise the relationship.[34]

On all domestic routes Jetstar has a buy on board single class service offering food and drinks for purchase.[35]

On all Boeing 787 international routes, Jetstar offers a two-class service.

Jetstar offers Business Class on its B787-8 aircraft. The Business Class cabin is fitted with 21 leather premium class seats in a 2-3-2 configuration, similar to Qantas domestic Business Class or Qantas international premium economy class. The service is inclusive of all meals and beverages, in-flight entertainment, and includes an increased baggage allowance of 30 kg. Business Max fares also include Qantas Club lounge access where available, and earn Qantas Frequent Flyer points.[36]

Jetstar offers either pre-purchased meals on wheels or buy on board service with food and beverages. 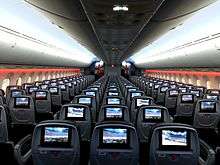 Seat-back videos in the economy class section of Jetstar's Boeing 787.

The airline has an eponymously-named inflight magazine. In November 2011 Jetstar became the first airline to offer passengers iPads for use as in-flight entertainment devices. The units, which are pre-loaded with movies, games and magazines, are provided on flights over two hours duration and are available for a fee in Economy Class but are complimentary in the international Business Class cabin, although some aircraft have seat back entertainment screens.[37] The options available are changed on a bi-monthly basis depending on customer feedback forms which are collected by head office through a random selection process.[38]

The Nine Network began airing the series Going Places from October 2007. The eight-part series depicted the everyday lives of selected members of Jetstar's Melbourne airport staff. The show followed the dramas of the check-in staff mid-flight, and new international recruits.

In addition to owning 100% of Jetstar Airways in Australia (also operating in New Zealand), the Qantas Group owns varying stakes in other Jetstar-branded airlines in the Asia-Pacific region. These airlines represent a strategy to provide better growth for the Qantas Group by accessing the intra-Asia market:[39] exploiting both its faster growth and/or its under-penetration by low-cost airlines.

Qantas partners with local investors as both a means to overcome foreign ownership or traffic rights restrictions[40] and to keep the ventures "capital light", i.e. reduce the capital investment required by Qantas and keep assets such as aircraft off the Qantas balance sheet.[41][42]

The Jetstar Group consists of the following airlines:

The Jetstar Group is headed by CEO Jayne Hrdlicka.[54]

^Note 3 The Jetstar financial results include Jetstar Airways, Jetstar Asia Airways and Valuair as consolidated entities in the Qantas Group accounts.[3] Despite Qantas owning only a minority stake in Jetstar Asia Airways and Valuair (51% owned and effectively controlled by Singaporean nationals as required under Singapore aviation regulations), Australian accounting standards have required them to be treated as consolidated entities since 8 April 2009.[59] Jetstar Pacific Airlines and Jetstar Japan are treated as investments in associates and not consolidated in the Qantas Group accounts.