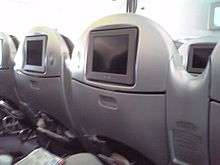 Premium economy is a travel class offered on some airlines. Positioning in price, comfort, and amenities, this travel class is leveled between economy class and business class. In 1991, EVA Air was the first to introduce Evergreen Class and had since become the first airline to offer this class of service in the world.

As of 2011, the term is not standardized among airlines, and varies significantly between domestic and international flights and between low-cost or regional airlines and other airliners.[1] Premium economy is sometimes limited to just a bit more leg room, but at its most comprehensive can feature services associated with business class travel.[1]

[1]Air New Zealand's and Qantas' Premium Economy and Virgin America's First include amenities such as prioritized check-in, large customized seats (some for couples, others targeting solo travelers), seat pitch up to 41 inches (104 cm) with 50% more recline, premium meals, a self-service bar for drinks and snacks, a personal in-flight entertainment center with remote control, noise-cancelling headphones and choices in games and movies for children and adults, skin care products in the lavatory, and an amenities pouch containing items such as socks, sleep masks, earplugs, and toothbrushes.[2]

At the other extreme, some extra legroom seats in Economy Class, with the same service and seat model, are also marketed as an enhanced Economy class in some airlines. For example, in the United States domestic market, airlines such as American, United, Delta, and JetBlue have an upgraded Economy class with 2–5 inches (5–13 cm) more leg room as the only difference; they market the class as Main Cabin Extra,[3][4] Economy Plus, Economy Comfort, and Even More Legroom respectively, while other services such as ground services and food and beverage services are on par with their normal Economy Class. [1] These more limited travel class versions are more similar to traditional Economy class before airlines started reducing the quality and amenities of Economy Class over the past few decades, and arguably are not a true Premium Economy class.

Service codes used by airlines vary, but are usually in W, R or T – for example, Virgin Atlantic uses W as a subclass code for its Premium Economy product.[5]

Differences between Premium Economy and Economy class may include:

Some airlines may designate an entire economy class as premium, such as United p.s. on its transcontinental Boeing 757-200 premium service aircraft. Premium Economy tickets also normally earn more mileage in an airline's frequent flyer program, attracting a bonus between Economy and Business.

Airlines offering this service include: