Herbert S. Lewis states that in the early 1960s it was "the greatest market in all of south-western Ethiopia. On a good day in the dry season it attracts up to thirty thousand people."[1] 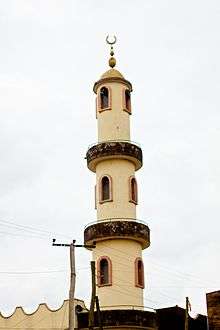 What is now Jimma's northern suburb of Jiren was the capital of a large Oromo kingdom until the late 19th century. Originally named Hirmata, the city owed its importance in the 19th century to being located on the caravan route between Shewa and the Kingdom of Kaffa, as well as being only six miles from the palace of the king of Jimma.

According to Donald Levine, in the early 19th century the market attracted thousands of people from neighboring regions: "Amhara from Gojjam and Shoa, Oromo from all the Gibe Kingdoms and numerous representatives of the Lacustrine and Omotic groups, including Timbaro, Qabena, Kefa, Janjero, Welamo, Konta and several others".[2]

The present town was developed on the Awetu River by the Italian colonial regime in the 1930s. At that time, with the goal of weakening the native Ethiopian Church, the Italians intended to make Jimma an important center of Islamic learning, and founded an academy to teach fiqh.[3] In the East African fighting of World War II after their main force was defeated, the Italian garrison at Jimma was one of the last to surrender, holding out til July 1941.

Jimma was the scene of a violent encounter which started in April 1975 between radical college students (known as zemacha) sent to organize local peasants, who had benefited from land reform, and local police, who had sided with local landowners. Students and peasant followers had imprisoned local small landowners, rich peasants and members of the local police force; this action led to further unrest, causing the Derg (the ruling junta) to send a special delegation to Jimma, which sided with the local police. In the end, 24 students were killed, more arrested, and the local zemacha camps closed.[4]

Days before the end of the Ethiopian Civil War in May 1991, the city was captured by the Ethiopian People's Revolutionary Democratic Front.

On 13 December 2006, the Ethiopian government announced that it had secured a loan of US$98 million from the African Development Bank to pave the 227 kilometers of highway between Jimma and Mizan Teferi to the southwest. The loan would cover 64% of the 1270.97 million Birr budgeted for this project.[5]

Jimma has a tropical rainforest climate (Af) under the Köppen climate classification. It features a long annual wet season from March to October.

Temperatures at Jimma are in a comfortable range, with the daily mean staying between 20°C and 25°C year-round. 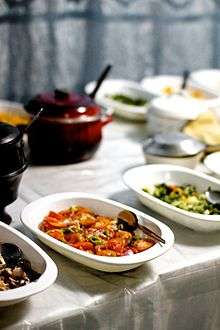 Dishes at a Jimma restaurant.

Some buildings survive from the time of the Jimma Kingdom, including the Palace of Abba Jifar. The city is home to a museum, Jimma University, several markets, and an airport (ICAO code HAJM, IATA JIM). Also of note is the Jimma Research Center, founded in 1968, which is run by the Ethiopian Institute of Agricultural Research. The Center specializes in agricultural research, including serving as the national center for research to improve the yield of coffee and spices.[8]