Dire Dawa (Amharic: ድሬ ዳዋ?, Oromo: Dirre Dhawaa, lit. "Place of Remedy",[3] Somali: Dirre Dhabe, meaning "where Dir hit his spear into the ground", Arabic: ديري داوا‎‎[4][5]) is one of two chartered cities (astedader akabibi) in Ethiopia (the other being the capital, Addis Ababa). It is divided administratively into two woredas, the city proper and the non-urban woreda of Gurgura. According to the "Futuh Al Habasha: Conquest of Abyssinia", the area or settlement was only called Dir after the major Somali clan around 5 centuries ago.[6]

The city is an industrial centre, home to several markets and the Aba Tenna Dejazmach Yilma International Airport. Haramaya University is 40 kilometres (25 miles) away.

Created in 1897 after the establishment of Alfred Ilg's Imperial Railway Company of Ethiopia, Dire Dawa—originally known by its period French spelling Dire-Daoua[8]—grew up at the site of a former village known as Addis Harar (Amharic for "New Harar") upon the line's arrival in 1902.[8] The company (which went bankrupt four years later) was already having financial difficulty and Ilg received permission from Emperor Menelik II not to complete the expensive climb to nearby Harar at its higher elevation. Instead, Addis Harar served as the terminus for the line linking the area with the French port at Djibouti and the potentially confusing name was changed to that of another nearby village, Dire Dawa.[8] Harar's governor Ras Makonnen then linked the two cities with a new road.

Dire Dawa's first governor was Ato Mersha Nahusenay, who was also instrumental in the construction of the first railway.[9][10] The imperial railway company (Cie) played a key role in the early development of the city, particularly Gezira (aka Kezira), under the authority of the Ethiopian government. The original failed company was reörganized as the joint-government Franco-Ethiopian Railway in 1908 and, after a period of financial negotiation and recapitalization, construction began anew, linking the city with the Ethiopian capital Addis Ababa in 1917. The Dire Dawa-Harar road was improved in 1928, shortening the travel time to only a few hours.[11] In 1931, the Bank of Ethiopia opened its first branch in the city[12] and, a generation later, the writer C.F. Rey described the city as the most "advanced" urban center in the area, with good roads, electric lights, and piped water.[13]

During the Italian invasion, Mussolini ordered that Addis Ababa and Dire Dawa be spared air attacks (which included the use of chemical weapons such as mustard gas) and other destruction as a response to the demands of the United States and certain European countries for the safety of their citizens. The Italian army entered the country from the colonies of Eritrea in the north and Somalia in the southeast. Following all major engagements of the war, Dire Dawa was the location of the meeting of the two Italian forces. General Graziani's units, advancing from Harar, reached the city's barbed-wire fence on 6 May 1936, the day after the occupation of Addis Ababa and Emperor Haile Selassie's flight along the railroad to Djibouti and Palestine. They were met by two French armed cars: the railway remained under French administration and they had remained to protect the French interests. The next day, the first train under Italian control left Addis Ababa: it brought Italy's 46th Infantry Regiment and finally closed the pincers of the two Italian invasion forces. The occupation of the town was more or less a formality,[12] although resistance fighters known as Arbegnoch ("Patriots") continued to operate throughout the conflict. It was officially known by its Italian spelling Dire Daua during the occupation.

Following the restoration of the empire in 1941, Dire Dawa was among the early provincial towns to have its own soccer league. Around 1947, their team—the Taffari—participated in the Ethiopian Championship series. That same year, the Railroad Workers Syndicate of Dire Dawa, a labor union, was formed for welfare purposes.[12] Although its leadership coöperated with the government, its attempt to strike in 1949 was brutally suppressed by imperial troops; at the time, all strikes were seen as forms of insurrection or treason.[14] In 1955, a public address system was installed in the central square to receive and rebroadcast state radio transmissions.[12]

The Ethiopian revolution affected the city in many ways. Starting March 1974, there was some worker unrest; six people were wounded when police opened fire on demonstrating railwaymen and students on 17 April. Many Europeans, Yemeni Arabs, and Indians left Dire Dawa; the Greek and Armenian churches were eventually closed due to dwindling membership. On 3 February 1975, the Derg announced that the Cotton Company of Ethiopia was among 14 textile enterprises to be fully nationalized. The cement factory was also later nationalized. In August 1976, the entire leadership of the local branch of the teachers' union was sacked for alleged anti-revolutionary activities. Ten new officials were appointed pending fresh elections.[12]

According to Gebru Tareke, the success of the Ethiopian Army in holding Dire Dawa (17–18 August 1977) against the Somali Army was decisive in winning the Ogaden War.[15] The war led to widespread dislocation of Ethiopia's native Somali population and subsequent repopulation from other areas of the country greatly decreased their importance around Dire Dawa.

Dire Dawa was occupied by the EPRDF on 31 May 1991. There were reports of about 100 people killed resisting the EPRDF. In 1991, when the Somali National Movement took control of northern Somalia, they dismantled and sold the only publicly owned industry in the whole Somali northern region, a cement factory near Berbera, which was shipped off to help expand the cement factory in Dire Dawa.[12] Both the Issa and Gurgura Liberation Front and the Oromo Liberation Front claimed the city. As a result, there were numerous clashes between the two groups from 1991 until 1993. When the Somali Regional State was being established in 1993, it wanted Dire Dawa to be its capital. This was opposed by the Oromia Region, so the federal government placed the city under its own jurisdiction to avoid territorial conflict between the two regions.[16]

On 24 June 2002, a small explosive was detonated at the headquarters of the Ethiopian Railway Commission in Dire Dawa. The Oromo Liberation Front afterwards claimed responsibility for this attack in retaliation "for the continuing harassment of Oromo students, merchants, and farmers by the Ethiopian government." Although blamed for other isolated incidents, this was the latest bombing inside Ethiopia for which the OLF claimed responsibility.[17]

Dire Dawa moved out of federal administration to become a chartered city in 2004 after the federal parliament approved the city charter in proclamation 416/2004.[16]

The city was flooded in August 2006 when the Dechatu River overflowed its banks. About 200 people were reported dead, thousands were displaced and there was extensive damage to homes and markets. Floods are fairly common during the June–September rainy season; over 200 people in the region had been killed by flooding in 2005 that did millions of dollars in damage.[18]

An overturned truck, heading from Dengego to Dire Dawa, killed 41 people 4 March 2009. The truck was carrying an unknown number of day laborers when the accident happened, and 38 were immediately killed and as many as 50 were injured. Dead and injured were taken to Dil-chora Hospital in Dire Dawa. The cause was not immediately known.[19]

Currently, there are plans to revitalize the city. A historic and popular part of the city is to be demolished and replaced by a financial center, malls, mixed-use buildings, hotels, recreational facilities, and hospitals. As part of the plan, historical buildings will be renovated, and a new space will be allotted for building new homes and businesses for those displaced by the move. New roads, parks, and an industrial zone will also be built, and major railway project is expected to greatly increase business activity in the city.[20][21]

Dire Dawa has a hot semi-arid climate (Köppen climate classification BSh). It's a warm and dry climate with a relatively low level of precipitation. The mean annual temperature of Dire Dawa is about 25.9 °C (78.6 °F). The average maximum temperature of Dire Dawa is 32.8 °C (91.0 °F), while its average minimum temperature is about 19.0 °C (66.2 °F). The region has two rain seasons; that is, a small rain season from March to April, and a more pronounced rain season that extends from August to September. The aggregate average annual rainfall that the region gets from these two seasons is about 583 mm (22.9 in).

A map of the regions and zones of Ethiopia

Censuses record that Oromo are the greatest percentage of the city, based on the number who speak the Oromo language. But the Gurgura clan share both Somali and Oromo identities, speaking the Oromo language and tracing their genealogy to the Dir, a Somali clan family.[16]

According to the CSA, as of 2004, 90.76% of the population had safe drinking water: 69.61% of rural and 99.48% of urban inhabitants having access.[25] Values for other reported common indicators of the standard of living for Dire Dawa as of 2005 include the following: 11.4% of the inhabitants fall into the lowest wealth quintile; adult literacy for men is 76.6% and for women 53%; and the civic infant mortality rate is 71 infant deaths per 1,000 live births, which is less than the nationwide average of 77; at least half of these deaths occurred in the infants’ first month of life.[26]

Dire Dawa received postal service in August 1906, becoming the third location after Addis Ababa and Harar. Telephone service was available by 1954; by 1967, Dire Dawa had almost 500 telephone numbers, more than almost all other towns including Gondar, Harar, and Jimma.[12] 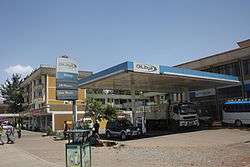 The invasive weed Parthenium hysterophorus (or Congress weed) was first observed in Ethiopia near Dire Dawa in 1980. Experts speculate that it entered the country either through the Djibouti - Addis Ababa railway line or the international airport, carried by one of the food aid programs.[28]

About 2007, a concrete sleeper factory was established, sited near the cement factory.

Dire Dawa is home to several market centers, the biggest being Taiwan along with Qefira which is on the flood plain. Near Dire Dawa and what is now Kebele 01, trading happened in the town called Melka Jebdu. It has been the gateway for most of the goods sold in places such as Taiwan. 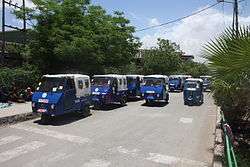 Dire Dawa is served by a station on the Addis Ababa–Djibouti Railway. The Dire Dawa Airport also offers flights to and from the city. Additionally, the Selam Bus Line Share Company provides inter-city bus service.

Chairmen of the Administrative Council