For the zone of this name in the Amhara Region, see Oromia Zone.

Oromia (spelled Oromiyaa in the Oromo language; Amharic: ኦሮምያ?) is one of the nine ethnically based regional states of Ethiopia, covering 284,538 square kilometers.[2] It is bordered by the Somali Region to the east; the Amhara Region, the Afar Region and the Benishangul-Gumuz Region to the north; South Sudan, Gambela Region, and Southern Nations, Nationalities, and Peoples' Region to the west; and Kenya to the south. The 2007 census reported Oromia's population at over 27 million, making it the largest state in population and area. 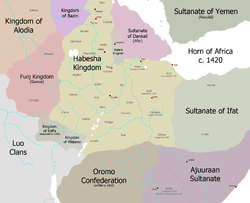 The region of Oromia was inhabited by ethnic communities for centuries. The earliest people to live in northern Oromia are believed to be Muslim Gurage people from southern Abyssinia.[3] The Sultanate of Ifat, Adal Sultanate, Sultanate of Showa, Kingdom of Damot, Kingdom of Ennarea, Ganz province, Sultanate of Bale, Maya, Hadiya Sultanate, Sultanate of Dawaro, Fatagar, Gumar, Gidim, Werjih, Gurage, Gafat were some of the kingdoms and peoples in the area before the 16th century Oromo expansion. Most of these ancient Kingdoms situated in present-day Oromia Region were semi-autonomous provinces of Abyssinian Empire.[4] The indigenous inhabitants were made Gabaros (serfs) and Oromized through collective adoption process known as Gudifacha and Mogasa. The affiliated groups were given new genealogies and started counting their putative ancestors in the same way as their adoptive kinsmen.[5] The native ancient names of the territories were replaced by the name of the Oromo clans who conquered it.[4][5]

Before 2000, the regional capital of Oromia was Addis Ababa, also known as "Finfinne" (in the Oromo language). The relocation of the regional capital to Adama sparked considerable controversy, and this forced the government to bring back the capital to Addis Ababa. Critics of the move believed the Ethiopian government wished to de-emphasize Addis Ababa's location within Oromia.[6][7] On the other hand, the government maintained that Addis Ababa "has been found inconvenient from the point of view of developing the language, culture and history of the Oromo people."[8]

On 10 June 2005, the Oromo People's Democratic Organization, part of the ruling coalition, officially announced plans to move the state capital back to Finfinne.[9]

Oromia shares a boundary with almost every region of Ethiopia except for the Tigray Region. This boundary has been disputed with Oromia's neighbors in a number of cases, most notably between Oromia and the Somali Region. One attempt to resolve the dispute between the two regions was the October 2004 referendum held in about 420 kebeles in 12 woredas across five zones of the Somali Region. According to the official results of the referendum, about 80% of the disputed areas have fallen under Oromia administration, though there were allegations of voting irregularities in many of them.[10] The results led over the following weeks to minorities in these kebeles being pressured to leave. In Oromya, estimates based on figures given by local woreda and kebele authorities suggest that 21,520 people have been displaced in border woredas, namely Mieso, Doba, and Erer in the Mirab and Misraq Hararghe Zones. Federal authorities believe that this number may be overstated by as much as 11,000. In Doba, the Ministry of Federal Affairs put the number of IDPs at 6,000. There are also more than 2,500 displaced persons in Mieso.[11] In addition, there were reports of people being displaced in the border area of Moyale and Borena zones due to this conflict.[12]

On 5 August 2016 protests broke out across Ethiopia and centered around the Oromia Region. Dozens of protesters were killed in the first days of the protests and internet service was cut to many parts of the region.

According to the CSA, as of 2004, 32% of the population had access to safe drinking water, of whom 23.7% were rural inhabitants and 91.03% were urban.[13] Values for other reported common indicators of the standard of living for Oromia as of 2005 include the following: 19.9% of the inhabitants fall into the lowest wealth quintile; adult literacy for men is 61.5% and for women 29.5%; and the regional infant mortality rate is 76 infant deaths per 1,000 live births, which is about the same as the nationwide average of 77; at least half of these deaths occurred in the infants' first month of life.[14]

Figures of full ethnic background are disputed, since many ethnically mixed Ethiopians are difficult to categorize. Particularly, Shewa Oromos and urban Oromos are known to have assimilated with ethnic Amhara and others, while southwestern Oromos have mixed with the Sidama and other ethnicities. The census and the general system of governance has remained controversial and related to the politics of the country. For instance, mixed Ethiopians with an Oromo father and Amhara mother are registered into the census using only their father's ethnic label. Similarly, Ethiopians with an Amhara father (or from another ethnic background) and Oromo mother are registered using only their father's ethnic label and counted as non-Oromo.

Oromo (Oromiffa), which is written with Latin characters, is the most commonly spoken language, spoken by 83.5% of the population. Other major languages are Amharic (11%) (especially in eastern Welega and northern Shewa), Gurage languages (Sebat Bet Gurage, Soddo, Silt'e), Hadiya, Gedeo (0.98%), especially in western and eastern Shewa; and Tigrigna (0.25%). Omotic languages are spoken by significant minorities in Jimma, Illubabor and western Welega; and some Nilo-Saharan languages (including Komo, Majang, Gumuz, and Berta) are spoken in communities scattered in the west.

The Oromia is subdivided into administrative zones: