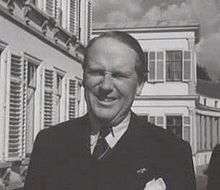 Johan Willem (Wim) Beyen (2 May 1897 in Utrecht – 29 April 1976 in 's-Gravenhage) was a Dutch banker, civil servant, politician, and diplomat. He served as Minister of Foreign Affairs of the Netherlands 1952–1956. Beyen played an important role in the creation of the European Economic Community, and is regarded as one of the founding fathers of the European Union. The 1981–1982 academic year at the College of Europe was named in his honour.

The official surname of Johan Willem (Wim) Beyen was Beijen, but he preferred to write his name as Beyen because he thought that this name was more appropriate for his international connections (the "ij" digraph only occurs in Dutch).

His father, Karel Hendrik Beijen, was a lawyer. He was the company secretary of the Maatschappij tot Exploitatie van Staatsspoorwegen, one of the Dutch railroad companies. His mother, Louisa Maria Coenen, stemmed from a family of musicians. He had two brothers. One of them was the archeologist Hendrik Gerard Beyen.

In 1922, Wim Beyen married Petronella J.G. (Nelly) Hijmans van Anrooij. They had two sons and a daughter. At the end of the 1930s Beyen had a relationship with the Austrian Margaretha Antonia (Gretel) Lubinka. After World War II his first marriage was dissolved and he married Gretel. This marriage was a very happy one.

Wim Beyen grew up in Utrecht and the neighbouring town of Bilthoven. He studied law at Utrecht University. In 1918, he was awarded a doctorate in law.

Successful careers in the public and the private sector

After his study Beyen was engaged as a temporary assistant clerk at the Dutch Ministry of Finance. At that time, he was only 21 years old. Within a few years he rose to the rank of Deputy Treasurer-General.

After 1924, Beyen had several positions in the business sector: secretary of the board of Philips, head of the Dutch branch of the central bank of the Dutch East Indies, director of one of the predecessors of the AMRO Bank, vice president and from 1937 president of the Bank for International Settlements in Basel, and director of Unilever.

During World War II, he was, in addition to his position at Unilever, financial advisor to the Dutch government in exile in London. In 1944, he played an important role during the Bretton Woods conference where the foundations were laid for the World Bank and the International Monetary Fund. From 1946, he was the Dutch representative in the board of the World Bank and from 1948 also in that of the IMF. 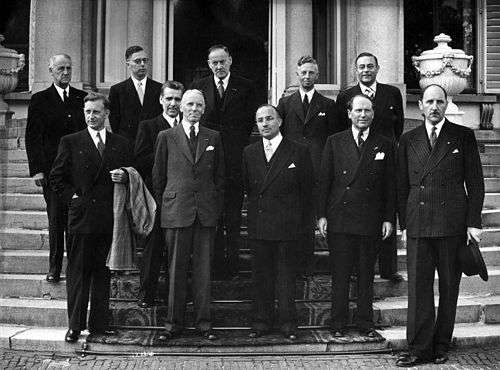 The new ministers of the Second Drees cabinet in 1952 after they were sworn in by Queen Juliana. Wim Beyen stands in the foreground, second from right. His colleague Joseph Luns is standing at the right end. In those years there was not yet a tradition that the Queen and the ministers who had served in the preceding cabinet were photographed as well.

In 1952 Wim Beyen, who did not belong to a political party, was appointed Minister of Foreign Affairs in the Second Drees cabinet. He was asked in order to ensure a better balance of powers within the cabinet. It was an odd situation that Joseph Luns, who was a member of the Catholic People's Party, was Minister without portfolio in the same Ministry. One of the jokes about this construction was "The Netherlands is so small, and therefore their foreign countries altogether are so large, that one Minister of Foreign Affairs is not enough."

The relationship between both ministers was not too good, because they had a completely different style of operating and disagreed about several issues. Beyen, for instance, had serious objections to Luns' attitude in the disputes with Indonesia about Netherlands New Guinea.

After the 1956 elections Beyen's political career came to an end. There was no longer a need for a nonpartisan minister in the cabinet.

Wim Beyen played a very important role in the creation of the European Economic Community.

In August 1954 the plans had collapsed to create a European Political Community and a common defence force, the European Defence Community, as a substitute for the national armies of France, Germany, Italy and the three Benelux countries, when France refused to ratify the Treaty.

Beyen realized that European integration in the political field would be impossible in the near future. He was convinced that had to be begun with economic cooperation, and developed a plan that called for a European common market, combined with the idea of a political community. He was in favour of horizontal integration instead of continuing with a sector by sector integration along the lines of the European Coal and Steel Community (ECSC).[1]

On 4 April 1955 he sent a memorandum to his BeNeLux colleagues Paul-Henri Spaak (Belgium) and Joseph Bech (Luxembourg) in which he proposed his idea of a customs union. In a meeting of the three Foreign Ministers of the BeNeLux in The Hague on 23 April 1955 they drafted a joint memorandum to present to their colleagues of the ECSC. They finalized the memorandum (the BeNeLux memorandum) on 18 May 1955 and presented it to the governments of France, Germany and Italy on 20 May 1955. They proposed to discuss in a conference of the six participating countries of the ECSC the way towards a general integration of the European economy.

This conference, the Messina Conference, was held from 1 to 3 June 1955. Beyen headed the Dutch delegation. The final resolution of the conference largely reflected Beyen's point of view. It formed the basis for further work to relaunch European integration and would lead to the Treaties of Rome in 1957 and the formation of the European Economic Community and Euratom in 1958.