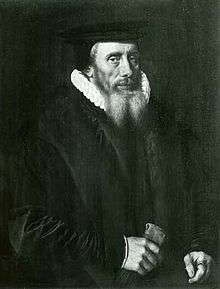 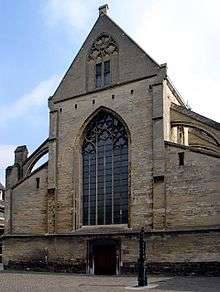 Church of the friars minor, where his epitaph can still be seen

He was born Jan Gerartsen van Gorp in the town of Gorp, in the municipality of Hilvarenbeek. As was the fashion of the time, Gerartsen adopted a Latinized surname based on the name of his birthplace, Goropius being rendered from "Van Gorp"' and Becanus referring to "Hilvarenbeek."

He studied medicine in Leuven, and became physician to two sisters of Charles V: Marie and Eleonore, who were based in Brussels at the time. Philip II, the son of Charles V, wanted him also as his doctor and offered him a rich income. Goropius refused and established himself as medicus (town doctor) of Antwerp in 1554. Here, free of courtly intrigues, Goropius dedicated himself completely to languages, studying antiquity; and became fluent in many languages.

Goropius died in Maastricht, where he was buried in the old friars minor church.

Goropius theorized that Antwerpian Brabantic, spoken in the region between the Scheldt and Meuse Rivers, was the original language spoken in Paradise. Goropius believed that the most ancient language on Earth would be the simplest language, and that the simplest language would contain mostly short words. Since Brabantic has a higher number of short words than do Latin, Greek, and Hebrew, Goropius reasoned that it was the older language.

A corollary of this theory was that all languages derived ultimately from Brabantic. The Latin word for “oak,” quercus, Goropius derived from werd-cou (“keeps out cold”); the Hebrew name “Noah” he derived from nood (“need”). Goropius also believed that Adam and Eve were Brabantic names (from Hath-Dam, or “dam against hate"; and Eu-Vat, “barrel from which people originated,” or from Eet-Vat, “oath-barrel,” respectively). Another corollary involved locating the Garden of Eden itself in the Brabant region. In the book known as Hieroglyphica, Goropius also proved to his own satisfaction that Egyptian hieroglyphics represented Brabantic.

In spite of his extensive travels in Italy, Spain, France, Germany and Britain, Goropius remained attached to his homeland, and reported on various curiosities and customs from his native region. In his Origines Antwerpianae (1569), a treatise describing the antiquities of Antwerp, Goropius reports various curiosities, among them that a youth almost nine feet tall and a woman about ten feet tall lived near his home. He also reports that Ters, a deity who seems to have been an equivalent of Priapus, was invoked by Antwerpian women when they were taken by surprise or sudden fear, and that there was a house in Antwerp adjoining the prison (see Het Steen) that bore a statue which had been furnished with a large worn away phallus.

Christoffel Plantijn had been a friend of Goropius's and the Antwerp-based printing house known as the Plantin Press, which first published Goropius's works in 1569, printed the linguist-physician’s posthumous collected work in 1580 as a massive volume of more than a thousand pages. Goropius's work was met with a mixture of ridicule and admiration. Goropius is considered to have given Dutch linguistics, and Gothic philology in general, a bad name. Though Goropius had admirers (among them Abraham Ortelius and Richard Hakluyt), his etymologies have been considered "linguistic chauvinism," and Leibniz coined the term goropism, meaning absurd etymological theories. Justus Lipsius and Hugo Grotius discounted Goropius's linguistic theories. "Never have I read greater nonsense," the scholar Joseph Scaliger wrote of Goropius's etymologies.

Goropius's work preceded that of William Jones, who discovered the Indo-European language family uniting Latin, Greek, and Sanskrit, among others.