Not to be confused with Eden Gardens or Eden Garden.
For other uses, see Garden of Eden (disambiguation).

The Garden of Eden as depicted in the first or left panel of Bosch's The Garden of Earthly Delights Triptych. The panel includes many imagined and exotic African animals.[1]

Traditionally, the favored derivation of the name "Eden" was from the Akkadian edinnu, derived from a Sumerian word meaning "plain" or "steppe". Eden is now believed to be more closely related to an Aramaic root word meaning "fruitful, well-watered."[3] The Hebrew term is translated "pleasure" in Sarah's secret saying in Genesis 18:9-15.[5]

Much like records of the great flood, creation story and confusion of languages, the story of Eden echoes the Mesopotamian myth of a king, as a primordial man, who is placed in a divine garden to guard the tree of life.[6] In the Hebrew Bible, Adam and Eve are depicted as walking around the Garden of Eden naked due to their innocence.[7] Eden and its rivers may signify the real Jerusalem, the Temple of Solomon, or the Promised Land. It may also represent the divine garden on Zion, and the mountain of God, which was also Jerusalem. The imagery of the Garden, with its serpent and cherubs, has been compared to the images of the Solomonic Temple with its copper serpent (the nehushtan) and guardian cherubs.[8] 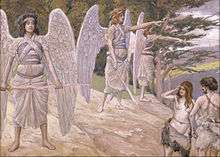 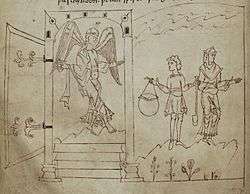 The Expulsion illustrated in the English Caedmon manuscript, c. 1000 CE

The second part of the Genesis creation narrative, Genesis 2:4-3:24, opens with Adonai Elohim (the LORD God, lit. YHWH Elohim, see Names of God in Judaism) creating the first man (Adam), whom he placed in a garden that he planted "eastward in Eden".[9]

And out of the ground made the Lord God to grow every tree that is pleasant to the sight, and good for food; the tree of life also in the midst of the garden, and the tree of knowledge of good and evil.
— Genesis 2:9

The man was free to eat from any tree in the garden except the tree of the knowledge of good and evil. Last of all, the God made a woman (Eve) from a rib of the man to be a companion the man. In chapter three, the man and the woman were seduced by the serpent into eating the forbidden fruit, and they were expelled from the garden to prevent them from eating of the tree of life, and thus living forever. Cherubim were placed east of the garden, "and a flaming sword which turned every way, to keep him away from the tree of life". (Gen.3:24) 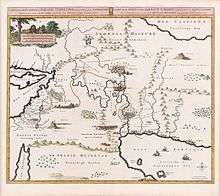 Map by Pierre Mortier, 1700, based on theories of Pierre Daniel Huet, Bishop of Avranches. A caption in French and Dutch reads: Map of the location of the terrestrial paradise, and of the country inhabited by the patriarchs, laid out for the good understanding of sacred history, by M. Pierre Daniel Huet.

Genesis 2:10-14 lists four rivers in association with the garden of Eden: Pishon, Gihon, the Tigris, and the Euphrates. It also refers to the land of Cush - translated/interpreted as Ethiopia, but thought by some to equate to Cossaea, a Greek name for the land of the Kassites.[10] These lands lie north of Elam, immediately to the east of ancient Babylon, which, unlike Ethiopia, does lie within the region being described.[11] In Antiquities of the Jews, the first-century Jewish historian Josephus identifies the Pishon as what "the Greeks called Ganges" and the Geon (Gehon) as the Nile.[12]

In Ezekiel 28:12–19 the prophet Ezekiel the "son of man" sets down God's word against the king of Tyre: the king was the "seal of perfection", adorned with precious stones from the day of his creation, placed by God in the garden of Eden on the holy mountain as a guardian cherub. But the king sinned through wickedness and violence, and so he was driven out of the garden and thrown to the earth, where now he is consumed by God's fire: "All the nations who knew you are appalled at you, you have come to a horrible end and will be no more." (v.19)

According to Terje Stordalen, the Eden in Ezekiel appears to be located in Lebanon.[13] "[I]t appears that the Lebanon is an alternative placement in Phoenician myth (as in Ez 28,13, III.48) of the Garden of Eden",[14] and there are connections between paradise, the garden of Eden and the forests of Lebanon (possibly used symbolically) within prophetic writings.[15] Edward Lipinski and Peter Kyle McCarter have suggested that the Garden of the gods (Sumerian paradise), the oldest Sumerian version of the Garden of Eden, relates to a mountain sanctuary in the Lebanon and Anti-Lebanon ranges.[16] 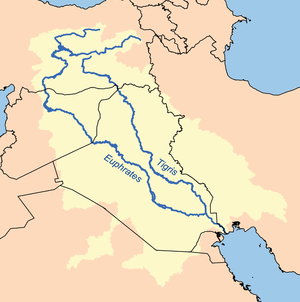 Map showing the rivers in the Middle East known in English as the Tigris and Euphrates.

Although the Garden of Eden is considered to be mythological by most scholars,[17][18][19][20][21][22] there have been other suggestions for its location:[23] for example, at the head of the Persian Gulf, in southern Mesopotamia (now Iraq) where the Tigris and Euphrates rivers run into the sea;[24] in Iranian Azerbaijan, and in the vicinity of Tabriz;,[25] and in the Armenian Highlands or Armenian Plateau.[26][27][28][29]

According to the Bible, the location of Eden is described in the Book of Genesis, chapter 2, verse 10-14:

A river flowed from Eden to water the garden, and from there it divided to make four streams. 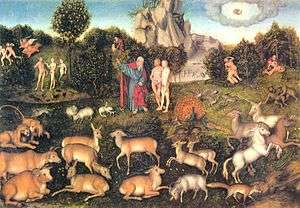 The Garden of Eden by Lucas Cranach der Ältere, a 16th-century German depiction of Eden 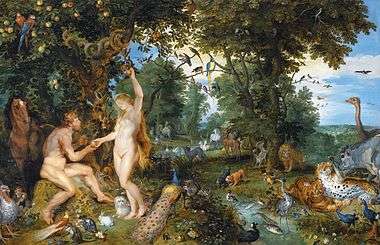 The Garden of Eden with the Fall of Man by Jan Brueghel the Elder and Pieter Paul Rubens, depicting both domestic and exotic wild animals such as tigers, parrots and ostriches co-existing in the garden

In the Talmud and the Jewish Kabbalah,[32] the scholars agree that there are two types of spiritual places called "Garden in Eden". The first is rather terrestrial, of abundant fertility and luxuriant vegetation, known as the "lower Gan Eden". The second is envisioned as being celestial, the habitation of righteous, Jewish and non-Jewish, immortal souls, known as the "higher Gan Eden". The Rabbanim differentiate between Gan and Eden. Adam is said to have dwelt only in the Gan, whereas Eden is said never to be witnessed by any mortal eye.[32]

According to Jewish eschatology,[33][34] the higher Gan Eden is called the "Garden of Righteousness". It has been created since the beginning of the world, and will appear gloriously at the end of time. The righteous dwelling there will enjoy the sight of the heavenly chayot carrying the throne of God. Each of the righteous will walk with God, who will lead them in a dance. Its Jewish and non-Jewish inhabitants are "clothed with garments of light and eternal life, and eat of the tree of life" (Enoch 58,3) near to God and His anointed ones.[34] This Jewish rabbinical concept of a higher Gan Eden is opposed by the Hebrew terms gehinnom[35] and sheol, figurative names for the place of spiritual purification for the wicked dead in Judaism, a place envisioned as being at the greatest possible distance from heaven.[36]

In modern Jewish eschatology it is believed that history will complete itself and the ultimate destination will be when all mankind returns to the Garden of Eden.[37]

Events taking place in the Garden of Eden are spoken about prominently in the Quran and the tafsir (interpretation). The term "Jannāt `Adni" ("Gardens of Eden" or "Gardens of Perpetual Residence") is used in the Qur'an for the destination of the righteous. There are several mentions of "the Garden" in the Qur'an (2:35, 7:19, 20:117), meaning the Garden of Eden, but without the word "`Adn".[38] There are other places that talk about events there, without mentioning the location. This includes surat Sad, which features 18 verses on the subject (38:71-88), surat al-Baqarah, surat al-A'raf, and surat al-Hijr. The narrative mainly surrounds the resulting expulsion of Iblis from the garden and his subsequent tempting of Adam and Eve. After Iblis refuses to follow God's command to bow down to Adam for being his greatest creation, Allah transforms him into Satan as a punishment. Despite the Biblical account, the Quran mentions only one tree in Eden, the tree of immortality, which Allah specifically claimed it was forbidden to Adam and Eve. Despite this, however, Satan, disguised as a serpent, repeatedly told Adam to eat from the tree, and eventually both Adam and Eve did so, resulting in disobeying Allah.[39] These stories are also featured in the Islamic hadith collections, including al-Tabari.[40]

Members of The Church of Jesus Christ of Latter-day Saints (also known as Mormons or Latter-day Saints) believe that after Adam and Eve were expelled from the Garden of Eden they resided in a place known as Adam-ondi-Ahman, located in present-day Daviess County, Missouri. It is recorded in the Doctrine and Covenants that Adam blessed his posterity there and that he will return to that place at the time of the final judgement[41][42] in fulfillment of biblical prophecy.[43]

Numerous early leaders of the Church, including Brigham Young, Heber C. Kimball, and George Q. Cannon, taught that the Garden of Eden itself was located in nearby Jackson County, Missouri,[44] but there are no surviving first-hand accounts of that doctrine being taught by Joseph Smith himself. LDS doctrine is unclear as to the exact location of the Garden of Eden, but tradition among Latter-Day Saints places it somewhere in the vicinity of Adam-ondi-Ahman, or in Jackson County.[45][46] 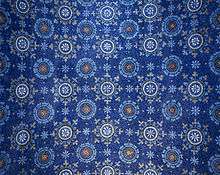 Garden of Eden motifs most frequently portrayed in illuminated manuscripts and paintings are the "Sleep of Adam" ("Creation of Eve"), the "Temptation of Eve" by the Serpent, the "Fall of Man" where Adam takes the fruit, and the "Expulsion". The idyll of "Naming Day in Eden" was less often depicted. Much of Milton's Paradise Lost occurs in the Garden of Eden. Michelangelo depicted a scene at the Garden of Eden in the Sistine Chapel ceiling. In the Divine Comedy, Dante places the Garden at the top of Mt. Purgatory. For many medieval writers, the image of the Garden of Eden also creates a location for human love and sexuality, often associated with the classic and medieval trope of the locus amoenus.[47] One of oldest depictions of Garden of Eden is made in Byzantine style in Ravenna, while the city was still under Byzantine control. A preserved blue mosaic is part of the mausoleum of Galla Placidia. Circular motifs represent flowers of the garden of Eden. 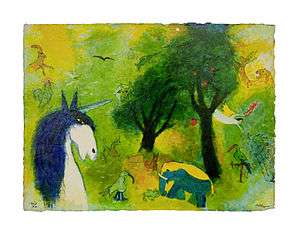