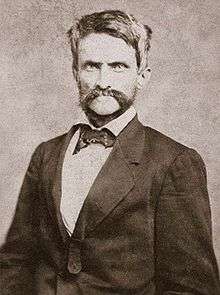 John Anthony Winston (September 4, 1812 – December 21, 1871) was the 15th Governor of the U.S. state of Alabama from 1853 to 1857. He was born in 1812 in Madison County, Alabama and became the first native born governor of Alabama. He was a son of William Winston and Mary Cooper of Tuscumbia Alabama. William was a son of Anthony Winston and Keziah Jones former residents of Buckingham County Virginia. John Anthony Winston married his first cousin, Mary Agness Jones, (born ca. 1819 and died ca. 1835) on August 7, 1832 in Madison County Alabama. He died 21 December 1871 in Mobile, Alabama and is buried in the Winston Family Cemetery (privately owned) near Gainesville in Sumter County Alabama. He had only one child, a daughter, Mary Agnes Winston. In January 1867 he presented his credentials to the United States Senate as Senator-elect from Alabama for the term 1867–1873, but was not permitted to take his seat.