Born in 1811 in Franklin, Tennessee, Houston was the son of David Ross and Hannah Pugh Reagan Houston. He worked on the family farm and attended a local academy. He read law in the office of Judge George Coalter of Florence, and completed his studies in a private law school at Harrodsburg, Kentucky.He was admitted to the bar in 1831.[1] In May 1835, he married Mary Jackson Beatty, and they had eight children; Mary Ida, Ross Jones, William Parrott, David Robert, Robert Beatty, George Smith, John Pugh, and Mary Ella. With his second wife, Ellen Irvine, he had three children, Mary E, Emma, and Maggie Lou.[2] 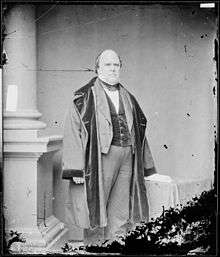 Houston was elected Alabama's 24th governor on November 3, 1874, and was sworn into office on November 24, 1874. He was reelected in 1876, serving until 1878. During his two terms, the 1875 Alabama Constitution was ratified, the Alabama State Board of Health was established, taxes were reduced, and state spending was controlled.[5] His governorship began a string of Democratic governors which was unbroken until H. Guy Hunt, a Republican, became governor in 1987.

Elected to the Senate in 1866, Houston was not allowed to take the seat, as Alabama was still under Reconstruction. He was later reelected and served in the Senate from March 4, 1879 until his death on December 31, 1879.[4]

Houston died in Athens, Limestone County, Alabama, on December 31, 1879 (age 68 years, 348 days). He is interred at Athens City Cemetery, Athens, Alabama.[6] Alabama's southeasternmost county was named for him in 1903, and the George Houston Memorial Bridge in Guntersville, Alabama (old and new) were named in his honor. The old bridge, a truss bridge built in 1930, was demolished in 1994 after receiving an imminent failure inspection rating.[7]