Brewer was born in Bethel Springs, Tennessee. He attended the University of Alabama and was a member of the Delta Sigma Phi fraternity. Prior to his election as the 21st Lieutenant Governor, he served three terms in the Alabama House of Representatives from Morgan County from 1954 to 1966. During the last of these terms, 1962 to 1966, Brewer, at age thirty-four, became the Speaker of the Alabama House of Representatives, the youngest person in state history to hold this post.

In 1964, Speaker Brewer and later U.S. Senator James B. Allen, then the lieutenant governor, were among the unpledged presidential electors on the Alabama ballot. They lost to the Republican slate committed to Barry M. Goldwater. No electors pledged to U.S. President Lyndon B. Johnson were permitted on the Alabama ballot. While national Democrats balked over Johnson's exclusion, most supported the unpledged slate, which competed directly with the Republican electors. As the The Tuscaloosa News explained, loyalist electors would have offered a clearer choice to voters than did the unpledged slate.[1]

Originally an ally of George Corley Wallace, Brewer was elected lieutenant governor in 1966 without opposition in the general election when Wallace's wife, Lurleen Burns Wallace, was the Democratic nominee for governor.

While lieutenant governor, he was acting governor for a portion of one day while Governor Lurleen Wallace was out of the state for more than twenty days for medical treatment. When this constitutional provision became operative, Mrs. Wallace was immediately rushed back into the state. 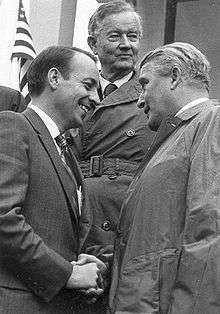 When Mrs. Wallace subsequently died in office in May 1968 and Brewer became governor, he took over direct management of the state and did not solicit input from George Wallace. Wallace was in the midst of his bid for the presidency under the American Independent Party. Thus, Brewer began to work to be elected as governor in his own right in 1970. In this effort, he gained an important ally in U.S. President Richard M. Nixon, who had defeated Wallace in the 1968 presidential election and who sought to neutralize Wallace as a potential adversary in 1972.[2] Brewer's 1970 gubernatorial campaign, however, was revolutionary in many respects. Although earlier in his political career he was regarded as a conservative segregationist (but not a race-baiter),[3] Brewer refused to engage in racist rhetoric and courted newly registered black voters. He hoped to build a coalition of blacks, educated middle-class whites, and working-class whites from northern Alabama, traditionally a more liberal part of the state. He unveiled a platform calling for more funding for education, an ethics commission, and a commission to revise Alabama's 1901 state constitution, which had been deliberately framed to disenfranchise blacks and poor whites.[4]

Brewer led Wallace in the Democratic primary but failed to win an outright majority. He then faced Wallace in a runoff. Running openly against the "black bloc" vote, Wallace slurred Brewer and his family.[5] Wallace narrowly won the Democratic runoff [5] and won the general election in a landslide.