Weller was born in Hamilton County, Ohio, and attended the public schools and Miami University in Oxford, Ohio. He then studied law, was admitted to the bar and practiced in Butler County, Ohio. He was prosecuting attorney of Butler County from 1833 until 1836.

He served in the 1st Regiment of Ohio Volunteers as a Lieutenant Colonel during Mexican-American War from 1846 until 1847, and then was an unsuccessful Democratic candidate for Governor of Ohio in 1848, a bitterly fought campaign, and the only disputed election for Ohio Governor of the 19th century. A select joint committee of the Ohio General Assembly finally established January 22, 1849 that Weller lost by 311 votes to Whig Seabury Ford.[1] 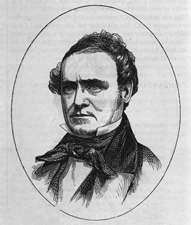 In 1849 and 1850, he was a member of the commission to establish the boundary line between California and Mexico. He was replaced by President Zachary Taylor, a Whig, who first named John C. Frémont. After Frémont resigned without beginning his duties, Taylor appointed John Russell Bartlett.

Weller then settled in California and practiced law. He was elected as a Democrat from California to the United States Senate for the term commencing March 4, 1851, and served from January 30, 1852, to March 3, 1857, but was an unsuccessful candidate for reelection. During the 34th Congress he was chairman of the U.S. Senate Committee on Military Affairs.

He was then elected Governor of California and served 1858 to 1860. As Governor, he intended to make California an independent republic if the North and South divided over slavery, and he personally led an assault on San Quentin Prison to take possession from a commercial contractor.[2]

After leaving the governorship, he was appointed Ambassador to Mexico near the end of 1860 by the lame-duck Buchanan administration. He presented his credentials in 1861, but was soon recalled by the new Lincoln Administration. He moved to New Orleans, Louisiana in 1867 and continued the practice of law.