Thomas Corwin (July 29, 1794 – December 18, 1865), also known as Tom Corwin and The Wagon Boy, was a politician from the state of Ohio who served as a prosecuting attorney, a member of the Ohio House of Representatives, the United States House of Representatives and the United States Senate, as well as the 15th Governor of Ohio, the 20th Secretary of the Treasury, and as United States Ambassador to Mexico. As a senator, he opposed the Mexican-American War. Corwin is best known for his sponsorship of the proposed Corwin Amendment to the United States Constitution in 1861, which was presented in an unsuccessful attempt to end the secessionist crisis and avoid the oncoming American Civil War. The Amendment would have forbidden the Federal Government from outlawing slavery.

From 1822 to 1823, and in 1829, Corwin was a member of the Ohio House of Representatives, where he made a spirited speech against the introduction of the whipping post into Ohio.[8] In 1830 he was elected as a Whig to the U.S. House of Representatives and served from March 4, 1831, until his resignation, effective May 30, 1840, having become a candidate for the office of Governor of Ohio. Known for his sharp wit, debating skills and endless campaigning, he was elected Governor in 1840, defeating incumbent Wilson Shannon. Shannon defeated Corwin in a rematch two years later.

Corwin was a Presidential elector in 1844 for the Whig Party ticket of Henry Clay and Theodore Frelinghuysen.[9]

Corwin was also a member of the United States Senate, having been elected by the Ohio General Assembly as a Whig and served from March 4, 1845 to July 20, 1850. As a legislator he spoke seldom, but always with great ability, his most famous speech being one given on February 11, 1847, opposing the Mexican-American War.[10] 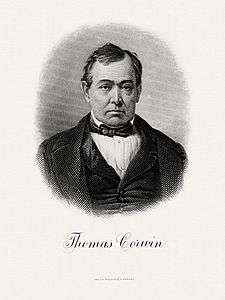 Bureau of Engraving and Printing portrait of Corwin as Secretary of the Treasury.

He resigned from the Senate to become President Millard Fillmore's Secretary of the Treasury shortly after the death of President Zachary Taylor. Like his immediate predecessor, William M. Meredith, Corwin believed in a protective tariff, but he did not want to make sudden or drastic changes in the free-trade tariff law of 1846. He objected to that law's provisions, which taxed some imported raw materials at a higher rate than the imported manufactured goods made from those materials, stating in a report to Congress that such provisions certainly take from the manufacturer and artisan that encouragement which the present law was intended to afford. As a longtime Whig, however, Corwin was unsuccessful in passing any tariff legislation in a Congress controlled by Democrats. He retired as Secretary shortly after the end of Filmore's administration.

In 1857, former Ohio Governor William Bebb shot a man and was tried in 1858 for manslaughter in Winnebago County, Illinois, where he lived. Corwin and co-council Judge William Johnston obtained an acquittal with an argument of self-defense.[11]

He was again elected to the House of Representatives in 1858, this time as a Republican and a member of the 36th Congress. In 1860, he was chairman of the House "Committee of Thirty-three," consisting of one member from each state, and appointed to consider the condition of the nation and, if possible, to devise some scheme for reconciling the North and the South in the secessionist crisis following the election of Abraham Lincoln to the presidency.[10] To that end, he sponsored a proposed Constitutional Amendment, which later became known as the Corwin Amendment, which forbade the Federal Government from outlawing slavery. It read:

No amendment shall be made to the Constitution which will authorize or give to Congress the power to abolish or interfere, within any State, with the domestic institutions thereof, including that of persons held to labor or service by the laws of said State.[12]

The proposed amendment passed Congress on March 2. However, only five states ratified it,[13] and war began anyway. Thus, the initiative failed in its goal of preventing the outbreak of the American Civil War.

Corwin was reelected to the House of Representatives in 1860, but resigned on March 12, 1861 after being appointed by the newly inaugurated President Lincoln to become Minister to Mexico, where he served until 1864. Corwin, well regarded among the Mexican public for his opposition to the Mexican-American War while in the Senate, helped keep relations with the Mexicans friendly throughout the course of the Civil War, despite Confederate efforts to sway their allegiances. 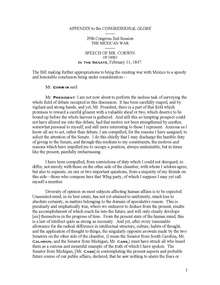 After resigning from his post as Minister, Corwin settled in Washington, D.C. in 1864, and practiced law until his death on December 18, 1865 at age 71. He is interred in Lebanon Cemetery, Lebanon, Ohio.[14]

Corwin is remembered chiefly as an orator.[10] His speeches both on the stump and in debate were examples of remarkable eloquence.[15]